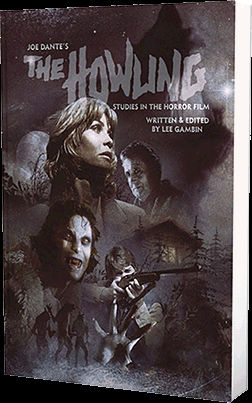 Centipede Press has recently released a new volume in their Studies in the Horror Film series, this time taking a deep and dark look into Joe Dante’s The Howling. While it is one of Dante’s earlier films, it still remains one of his best known titles, for many good reasons. Now, thanks to Lee Gambin, you can read more about this film than you ever thought possible!

Over 350 pages, loaded with color photos and an new introduction by Dee Wallace, this book includes rare behind-the-scenes photos, most of which have never been published before. There are interviews with the likes of Dee Wallace, Belinda Balaski, Dick Miller, Don McLeod, John Hora, John Sayles, Robert Picardo, and others. And of course, Joe Dante.

But there is more! According to the blurb from Centipede Press, you will also get “the definitive story of the making of The Howling, complete with an insightful plot synopsis and complete critical analysis, behind the scenes information, and a slew of interviews with cast and crew. Rounding out the book are nearly 150 stills of the movie, ranging from individual frame enlargements to rare, never-before-published behind the scenes photographs.” What more could any Howling fan ask for???

The price is only $35 and can be ordered directly from the publisher. For all the information, just click HERE.