20 years. Two whole decades of Turkeys. In fact, 174 films during those years. I started doing this little mini marathon back in 2003, on my own, as a way to celebrate the type of films that most critics would scoff at. Two years later, I was joined by my friend Aaron Christensen, who has never missed one since then. While it took a few years of it just being Aaron and I battling through these wonderful cinematic shipwrecks, by the time we got to 2010, the number of people joining us on this mad quest started to grow. We had 6 that year, increasing year by year to around a dozen each time. In 2010, we started our second annual event, Turkey Day in May, because there was just too much Turkey to do it only once a year! We did go online during the pandemic, where during those online adventures, we did get 20 to 25+ people watching online, so that was kind of cool. But it just wasn’t the same as being in the same room with other fans.

Before we get to the films, I wanted to send out a huge thanks to those that have attended my little crazy marathons. I started this because I wanted to give these movies the appreciation that I feel they deserve. As I’ve quoted many times before, the only bad movie is a boring one, and the ones we’ve screened over the last 20 years are far from boring. Well, okay, most of them weren’t. With every person that started attending, they not only understood that statement, but they believed 100% of it, and relished in the outrageous titles, sometimes just plain bat-shit crazy. Never making fun or shitting on these, we treat them with love and respect. My fellow Turkey Day attendees are more dedicated film lovers than any serious critic I know. Because we can see past the flaws of low budget, maybe with not the most talented cast, or a script that doesn’t seem possible that someone would not only want to film, but actually get it done with a straight face! For that, I am forever grateful to consider these fellow demented cinephiles my friends. They really know and understand what true cinema is.

END_OF_DOCUMENT_TOKEN_TO_BE_REPLACED

I seem to say this with every Turkey Day report, but it never ceases to amaze me. This was the 19th year I’ve held my little annual marathon, which means next year will be two whole decades since I started this maddening excursion. Even more crazy is the amount of people that are anxious to join me on that quest. Granted, since 2019, we’ve had to hold them online, which has been fun, but I have to admit that it is just not the same. I’m really hoping that by next year, we can get back to the in-person marathons, but we’ll just have to see. I know that is going to disappoint some of the people that have been able to partake in the online version, but maybe that just means you should start your own Turkey Day event!

Nonetheless, my first official Turkey Day was in November of 2003, where I was by myself. That’s dedication for you. But that was the last year going solo since the following year the number started to increase until we were hitting close to 15 or more people before the pandemic started. Going online, I think we hit over 25 joining at some point. In May of 2015, we started holding Turkey Day in May, simply because there were just too many turkeys to only hold this even once a year! So, from 2003 when it all started, this was the 26th Turkey Day Marathon. That . . . is a lot of Turkeys. But it also was a lot of fun as well.

One of the things I posted earlier this month was about what I was thankful for. To have a group of friends, and even some I never have met, join together for these crazy viewing parties is something I am forever grateful for. To those that joined in, even if it was for only one or two films, thank you.

But let’s get the movies!

END_OF_DOCUMENT_TOKEN_TO_BE_REPLACED

It is that time a year again, folks. Time to set aside those classic movies and dive right into the mud! We are just a few weeks away from our annual Turkey Day Marathon, which once again, we will be doing it online, like we have been for the last 2 years. It will take place on Friday, November 26th, at 10am sharp! We are scheduling at least 5 features, but maybe more if everyone is so inclined. I have 7 planned out, so we’ll have to see how the day goes. So, mark you calendar! I’ll be posting the link once we get a little closer but will also be having a trial run with a screening of 1 film on Saturday the 20th. Not sure exactly when but probably around noon. This will be just so everyone can try to get logged in and see how it all works, especially if you’ve never done this before, or (like me) you might have forgotten and want to make sure you don’t have any issues.

END_OF_DOCUMENT_TOKEN_TO_BE_REPLACED

We may have just set a record with this year’s Turkey Day, at least when it comes to attendance. Once again, with the pandemic raging on, we were force to hold our Turkey Day marathon online, through a streaming service. This time though, we opened it up to everyone if they wanted to join in. And I think we had around 20+ people in the screening throughout most of the day. So for that, I think it was a great success. We did have a few glitches in the beginning, but thankfully my technical staff (aka Jason Coffman) was able to help me fix the problem and from there on went on with very little issues. END_OF_DOCUMENT_TOKEN_TO_BE_REPLACED 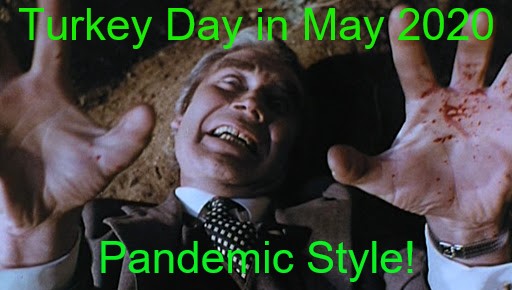 I started holding my Turkey Day events way back in November of 2003. In 2015, we started a second one, Turkey Day in May. Ever since these started, we have never missed holding one. The numbers for each of the events varies from time to time, but there is always a group of us enjoying some of these cinematic road bumps. And then the pandemic started. As much as I wanted to gather a group of friends and still hold our May event, it just didn’t seem like the right thing to do. Originally, I had just planned on doing it by myself, watching the movies I had planned. But then talking to Turkey Day regulars Aaron Christensen, and then Jason Coffman, they informed me of this streaming thing you can do where people just log in and can see what you’re playing on your computer. Now originally it would be nice to have video and audio of everyone attending but it really would just have been too many people, and the chatting might have interfered with the actual audio from the movie. Jason mentioned using Kast, which has a chat room feature, so at least people could still communicate, make jokes or whatever, and still be able to watch the film. So after a few trials, on May 30th, we held our first online Turkey Day event. We only got through 5 movies instead of our usual 7, but I think it turned out pretty good. Not to mentioned the fact that we had more people at this event, hitting past 20 people at times. END_OF_DOCUMENT_TOKEN_TO_BE_REPLACED 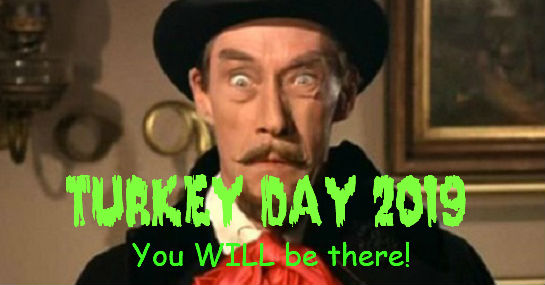 “The only bad movie is a boring one”, a statement made by author Stephen Thrower that I not only agree with, but live by as well! This last Turkey Day, we put that statement to the test and proven it to be true! For the most part, that is.

Before we get to our 17th year of holding our annual Turkey Day Marathon, I have to first say how thankful I am to have so many like-minded friends that journey out to the Chicago suburbs twice a year to celebrate the types of films that we watch. They are not only true cinephiles, but know that there is entertainment and enjoyment in even the lowest rated film out there. Well… most of them! END_OF_DOCUMENT_TOKEN_TO_BE_REPLACED

Now that Halloween season is official over, the next thing on calendar for us is of course, Turkey Day. No, I’m not talking about Thanksgiving, but our annual Turkey Day Marathon. Trust me, after getting through some of the titles we’ve watched over the years, just surviving is thankful enough! In all honestly, what I’m really thankful for is that I have a group of friends that make the trek out here every Black Friday to celebrate these Cinematic Shipwrecks along with me, and we have a lot of fun doing it. END_OF_DOCUMENT_TOKEN_TO_BE_REPLACED

When we get to November, here at the Krypt is all about Turkey Day. While most are planning ahead for Thanksgiving or even an early start on Christmas, we are planning Turkey Day. From picking the right titles for our bi-annual event, to my wife Dawn and son Nick coming up with some new ideas for pizzas, it really is a family event. And not just us, but our convention family that shows up to enjoy these movies and pizza with us! This is our 16th year holding our Turkey Day Marathon, and there is no stopping us now!

END_OF_DOCUMENT_TOKEN_TO_BE_REPLACED

It’s strange how things turn out in life. In case you didn’t know, these Turkey Day marathons that I’ve been doing since 2003, were started in tribute to Mystery Science Theater 3000 back when they were on Comedy Central, and used to show 24-hours of their shows non-stop the day after Thanksgiving, which they would call their Turkey Day Marathons. I loved that show and had most of them on VHS at one point. I loved that they brought a new audience to some of the films that I loved as a kid. But then a few weeks ago, I picked up a copy of Frank Conniff’s (TV’s Frank) book on his years on MST3K, called Twenty Five Mystery Science Theater 3000 Films that Changed my Life in No Way Whatsoever. It’s a little book, barely 100 pages, but as I paged through it, reading his thoughts on some of the titles were my favorites, it was almost like my childhood crashing down.
END_OF_DOCUMENT_TOKEN_TO_BE_REPLACED

Like any passage of time, there are bound to be good memories and bad ones. I would like to think that focusing on the good is the best thing to do, or for the bad ones, try and learn from it and take something positive from it. For example, all the great talent we lost in the last year, be thankful that we still can revisit them any time want by just popping in that DVD or Blu-ray.

After years of trying to get a screening of Mariano Baino’s Dark Waters in Chicago, it finally happened when it was part of the Music Box of Horrors. It had a good reception and writer/director Baino was there to experience the film’s very first screening in the Midwest! Thanks again to Will Morris getting it included in the lineup and Ryan at the Music Box for making it happen. And of course to Mariano and the wonderful Coralina for coming out, making this event even more special. It really was a highlight of my year. 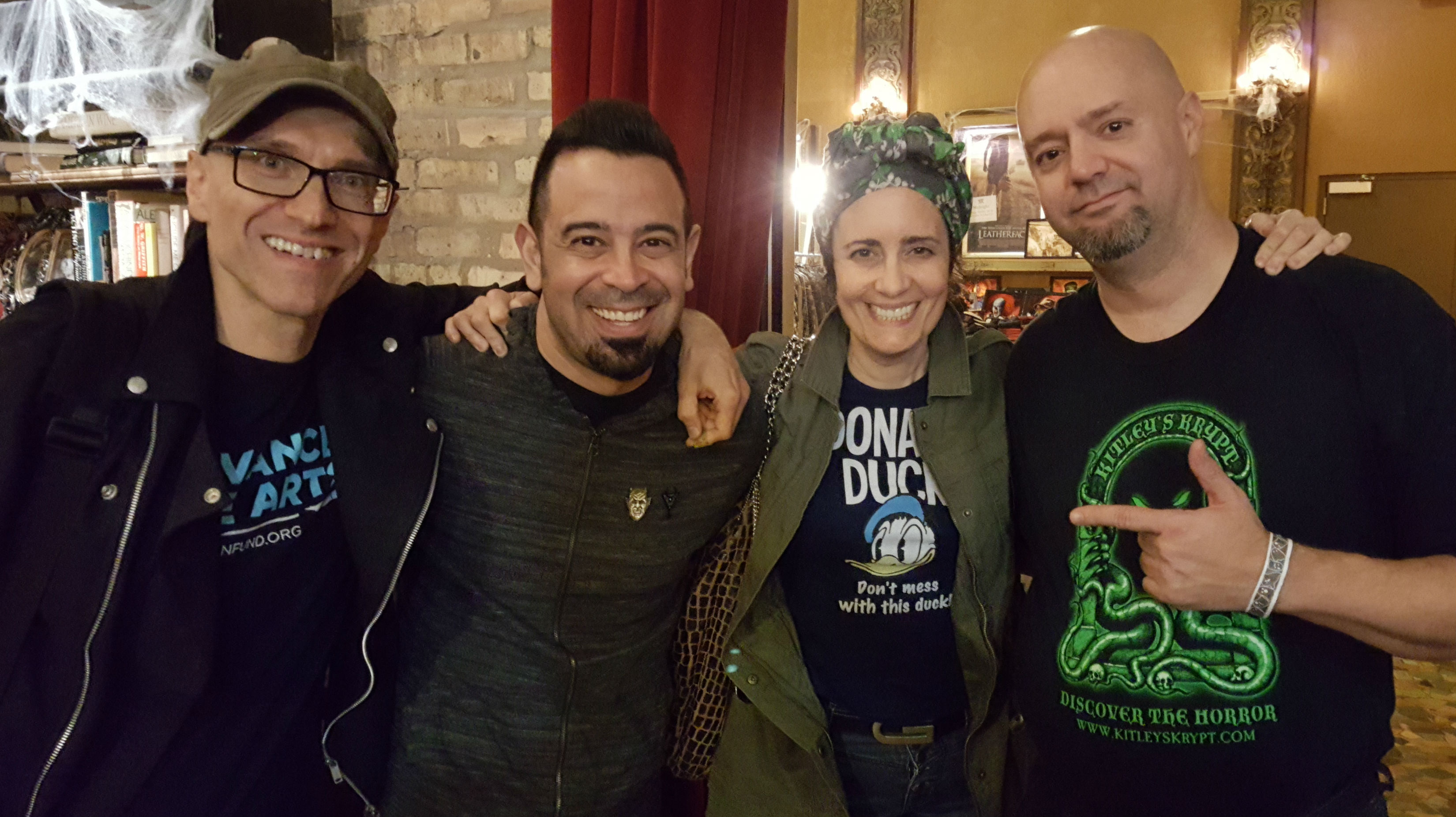 END_OF_DOCUMENT_TOKEN_TO_BE_REPLACED

"Alas... how terrible is wisdom when it brings no profit to the wise, Johnny?"
"Rock 'n Roll is NOT over, baby! Rock 'n Roll NEVER DIES!"
Happy Birthday Joe Dante!
"Juan of the Dead. Will kill your beloved ones, how can I help you?"
In a little more than an hour. . . . The madness begins!
Happy Thanksgiving from all of us at the Krypt.