There is a list of different filmmakers like Bill Rebane, Larry Buchanan, or Ted V. Mikels, that stayed away from Hollywood, making films on their own turf, with little or no money, but were still able to produce films that were entertaining. William Grefé was one of those, cranking out films made in Florida. Now thanks to Arrow Video, there is a box set of Grefé’s films coming out on Blu-ray this November that is a collection that I feel is a must for any fans of exploitation and drive-in features. The box set is going to feature 7 features, all newly restored from the best surviving film elements, in this one box set. The features are: Sting of Death (1966), Death Curse of Tartu (1966), The Hooked Generation (1968), The Psychedelic Priest (1971), The Naked Zoo (1971), Mako: Jaws of Death (1976) and Whiskey Mountain (1977). Haven’t heard of some of these? Well now is your chance to remedy that! I mean, how can you go wrong about a film that features a jellyfish man???

The set is going to be filled with extras to make any fan drool.  Amazon has it listed for $99.99, but you can pre-order it now from Diabolik DVD for only $59.99! Below is all the goodies in the set: END_OF_DOCUMENT_TOKEN_TO_BE_REPLACED 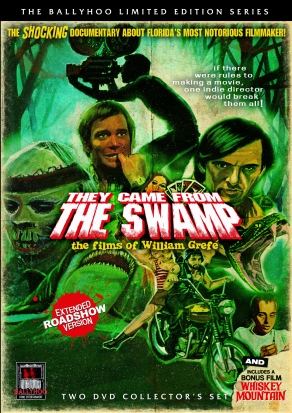 They Came From The Swamp: The Films of William Grefé
Directed by Daniel Griffith

If there is one thing that I’m always on my soapbox about, it is learning about the horror genre, from the very beginnings to modern day. The reason is simply because we need to recognize what came before us and remember what they gave us. It helps us appreciate where we are now. So when I heard about a documentary that was being made about this lesser known Florida based filmmaker, William Grefé, needless to say, I was excited.

END_OF_DOCUMENT_TOKEN_TO_BE_REPLACED

What do titles like Sting of Death, Stanley, Mako: The Jaws of Death, Wild Rebels, The Naked Zoo, Death Curse of Tartu, Impulse all have in common? They were just a handful of the films directed by Florida based filmmaker William Grefé! And now, the incredible history of this low budget filmmaker comes to the screens in this new feature lenght documentary, thanks to Ballyhoo Motion Pictures this April!

While other low budget directors were running off the the sunny skies of California to make their independent pictures, William Grefé stayed in the other sunny part fo the country, in Florida everglades area and made that his own little Hollywood. There he created about sharks, snakes, a jellyfish man, bikers, and many more titles that were sure to lure them into the drive-ins. And he always delivered.