I had been meaning to post about David Hedison’s passing, but now the news of Rutger Hauer has hit and it is a double dose of sadness.

David Hedison is one of those actors that only made a handful of genre appearances, but the ones that he did, definitely made an impact. Growing up watching a lot of TV, Voyage to the Bottom of the Sea was basically Star Trek but underwater, so it had my attention. Of course, then seeing The Fly (1958) would forever make me know who David Hedison is. Even though his face is covered through a good part of the film, he was still able to make you feel for his character. That is the power of a good actor, that they can only appear in a few things you’ve seen, but it still makes a lasting impression. 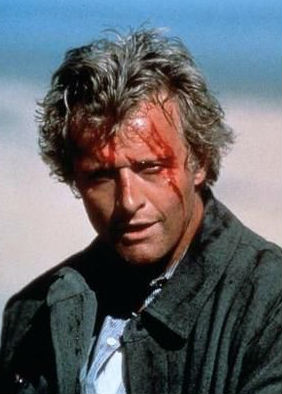 END_OF_DOCUMENT_TOKEN_TO_BE_REPLACED

Terror in the Desert
Published by McFarland, 2018. 312 pages
By Brad Sykes

In an age of internet reviews, when anybody with a computer can be a critic (me being one of them), sometimes we might read a negative review of a movie and brush it off without any inclination to visit it, or in some cases, re-visit it. And I think that is a big mistake on the part of all of us fans.

In his introduction in this book, author Sykes writes, “I honestly believe that most of the films profiled in these pages – flaws and all – have something to offer the viewer.” After reading that, it reminded me once again that even if a movie might only be a 2 or 2 1/2 stars out of 5, that doesn’t mean that it is a total waste of time, but that it still might have some merit and might just be worth watching. Might be a great special effect or stunt in there. Or just a great performance by one particular actor. We just never know. So I just wanted to throw that out there, giving a little credit to Sykes for reminding us fans something that we shouldn’t forget.

END_OF_DOCUMENT_TOKEN_TO_BE_REPLACED

Because I am forever waving the flag that print is NOT dead, when I see a book coming out or already released that is something that I would be interested in reading, I want to make sure others know about it as well. And of course, one of those subjects is on horror films.

McFarland has announced a new title called Terror in the Desert: Dark Cinema of the American Southwest, by Brad Sykes. Now offhand, one might not realize the films that take place in the desert. Sure, we immediately think of Hills Have Eyes, but what about titles like The Hitcher, Tremors, or even the more recent Bone Tomahawk?

Sykes looks back at this sub-genre of films to give them a critical and analysis that haven’t been done before. With rare stills, promotional materials, filmographies and more, not only does this sound like an interesting read, I have a feeling its going to make me add quite a few more titles to my “Need to Re-Watch” list!

You can find out more information by heading to McFarland’s website HERE.