The movie soundtrack can be just as important and effective as anything we’re seeing on screen, especially when it comes to the horror film. Just think of The Omen, The Exorcist, or even Creepshow. This episode we discuss some of our favorites and why we think they are effective.

Below are all the titles that are mentioned during the podcast, some in more details than others! Be sure to check some of these out and next time you’re watching one of them, or any movie, maybe pay a little more attention to what you’re hearing.

Below are the soundtracks that are mentioned during this episode of the podcast. We’d love to hear some of your favorites!

END_OF_DOCUMENT_TOKEN_TO_BE_REPLACED

Just in case you might be late to the party, next weekend, Aug. 27th & 28th, at the Skyline Drive-in, they are holding their 10th annual Super Monster Movie Fest, with the theme this year of The Devil Made Us Do It, featuring 10 films dealing all things with the devil! We’ve been coming out to this event pretty much every year since 2012, and once again, we’re excited as hell to head out there next weekend as well!

Here is the final lineup and times for this year’s features:

END_OF_DOCUMENT_TOKEN_TO_BE_REPLACED

The Skyline Drive-in in Shelbyville, IN has announced their lineup for this year’s Super Monster Movie Fest, and it is a DOOZY! The theme this year was The Devil Made Us Do It and I have to say, ‘ol Lucifer really helped them in programming one hell of a show! Taking place the weekend of Aug. 27th & 28th, with a special appearance by Sammy Terry! Here is what they will be screening:

We’ve been going to this event for quite a few years now and always have such a great time. They really have an incredible lineup, from some old classics like The Black Cat with Boris Karloff and Bela Lugosi appearing together for the first time on the big screen, Mario Bava’s Black Sunday, Jacques Tourneur’s Curse of the Demon, to some favorites from the 80s like Evilspeak! How can you go wrong with Clint Howard contacting demonic evil though his computer?!?! Not to mention all the devilish delights you’ll find at their snack bar throughout the night! Hope to see you there!

In the last few days, the Skyline Drive-In in Shelbyville, IN, announced several weekends of horror lineups coming up in October. I’m not sure how many of them I’ll make, but I know I’ll be there for the last one I have listed! For all the information head over to their Facebook page HERE.

Below is the events they have listed and what will be screening. Start making your plans!

Horror scholar David J. Skal has a new book coming out this fall, just in time for Halloween, entitled Fright Favorites: 31 Movies to Haunt Your Halloween and Beyond. Presented by Turner Classic Movies, Skal takes on 31 films ranging from the silent era, hitting a few titles from each decade through the ’80s, and a few beyond that. Most of these everyone will agree are classics, with a few comedies listed in the later day titles. The description in Amazon says they are “family-friendly” but not sure The Exorcist (1973) and The Thing (1982) are ones I would be screening for 8-year old Timmy! END_OF_DOCUMENT_TOKEN_TO_BE_REPLACED

For this Friday Favorites, we’re going to do something a little different. On this day in 1922, Richard Emerson Smith was born, in Larchmont, New York, and would grow up to become one of the greatest makeup artist of all time. When it comes to the horror genre, while he did work on a few, it was nowhere near as many as some of his contemporaries or the next generation of artists, such as Rick Baker, Stan Winston, or Tom Savini. But the ones he did work on, literally changed movie history. For the longest time, I thought 44-year old Max Von Sydow was a much older man because of the old age makeup Smith did on him for The Exorcist (1973). Not only did he do the character makeup for Marlon Brando in The Godfather (1972), but also the realistic bullet hits as well. END_OF_DOCUMENT_TOKEN_TO_BE_REPLACED

Since the internet has been flooded with notices about this a few days ago, everyone I’m sure has heard of the passing of actor Max von Sydow.  Even though he only made less than a dozen films you could consider horror, you couldn’t be a fan of the genre and not know who this man was, because of The Exorcist (1973). Granted, like a lot of us, we always assumed he was already an old man because of the incredible aged makeup he wore in that film, thanks to Dick Smith. But no matter what role he had, like a small part in Conan the Barbarian (1982), the over-the-top role of the Emperor Ming in Flash Gordon (1980), to even the humorous role of Brewmeister Smith in Strange Brew (1983), he always commanded your attention, as well as gave a very memorable performance.

From his early days with Ingmar Bergman to Dario Argento in Sleepless (2001), to even working with Martin Scorsese in Shutter Island (2010), he always had a captive audience with his talent. He is one that will definitely live on and be remembered for all of those incredible characters. Our thoughts go out to his friends and family.

At the recent Flashback Weekend, they announced the date for this year’s Dusk to Dawn Horrorfest and 3 out of the 4 features they will be screening. And as always, it is one you are not going to want to miss.

Taking place on Saturday, Sept. 21st, they will be screening undoubtedly one of the scariest films ever made, The Exorcist (1973). I know the first time I watched this was on TV in the severely edited version and it still kept me awake at night. It is a film that still packs a punch and has not lost any of its effectiveness to creep into the audiences’ psyche. With great performances from Jason Miller, Max Von Sydow, Lee J. Cobb, Linda Blair, and of course, Ellen Burstyn, who gives a performance that I think is one of the reason this movie is so powerful, since we are living through her character. Not to mention the incredible makeup effects by Dick Smith (and his young assistant Rick Baker). Seeing this one the big screen will really be a religious experience! END_OF_DOCUMENT_TOKEN_TO_BE_REPLACED 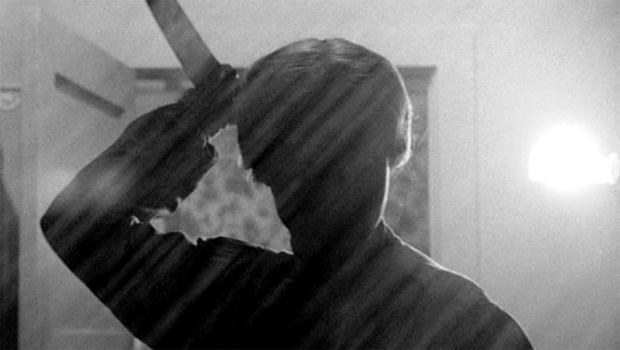 The Egyptian Theatre in Dekalb, IL has announced a Horror Film Series in October, showing a classic horror film every Tuesday throughout the month. Tickets are $8 each and the movies will start at 7pm. Here is what they will be screening: END_OF_DOCUMENT_TOKEN_TO_BE_REPLACED

Thursday, we have lost the author of one of the greatest horror novels of all time, William Peter Blatty. If you’ve never read the actual novel of The Exorcist, you’d be surprised at how effective it is, digging into your core just as much as the film version, if not more. That’s how good Blatty was. Strange though that before this novel, he was known for the most part as a comedic writer, writing several films for Blake Edwards, including the Pink Panther movie A Shot in the Dark. But once The Exorcist came out, there really was no turning back for him and he would always be known as “that guy”. But while it did pigeon hole him, he told the Washington Post in 2013, “I can’t regret The Exorcist. It’s done so much for me and for my family. And it’s given me a great deal of freedom to write what I want.”

Ever since he heard about the story about a 14-year old boy that was ‘cured’ by an exorcism in 1949, Blatty knew there was a novel in there, but it took over twenty years for it to finally come to be, in 1971. Two years later, director William Friedkin turned the book into one of the scariest films of all time, which actually got Blatty an Oscar for Best Adapted Screenplay. A decade later, he would write a sequel to the book, called Legion, which he then adapted and directed the film version, entitled Exorcist III.

END_OF_DOCUMENT_TOKEN_TO_BE_REPLACED

"Rock 'n Roll is NOT over, baby! Rock 'n Roll NEVER DIES!"
Happy Birthday Joe Dante!
"Juan of the Dead. Will kill your beloved ones, how can I help you?"
In a little more than an hour. . . . The madness begins!
Happy Thanksgiving from all of us at the Krypt.
Happy Birthday Boris Karloff!