Everyone reading this knows I tend to collect horror reference books. More than your average fan. And because of my love of them, I always like to help promote them as well, either through reviews or just letting my followers know about upcoming titles that might be of interests.

In the past, I’ve made posts about some books that publishers like to re-issue every couple of years, but change the title and cover a little to make it seem like its a new book. For example, Carlton Books have re-issued their Horror! title that was first published in 2006, at least 3 different times, all with a new cover and all with a slightly different name, adding a few pages at the end to “update” it to the current year. Sure, newer fans aren’t going to have the previous release, but at least they could do is state that it is an updated edition. END_OF_DOCUMENT_TOKEN_TO_BE_REPLACED 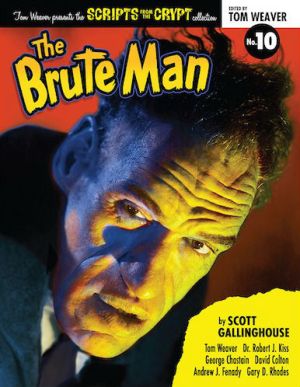 In the latest volume of Tom Weaver’s Scripts from the Crypt series, No. 10 will cover the 1946 film The Brute Man. By Scott Gallinghouse, Dr. Robert J. Kiss, George Chastain, David Colton, Andrew J. Fenady, and Gary D. Rhodes, they give us a look into not only this film, it’s production and release, but there is also a biography chapter on Rondo Hatton himself.

Hatton, who became a B-Movie villain due to his particular looks that were caused by acromegaly, a disease that causes disfigurement in the hands, feet, and face. He appeared in films such as The Pearl of Death (1944), House of Horrors (1946), and his final film, The Brute Man.

It will be a very interesting read to learn more about this film, but especially more about Hatton himself. I’m sure he’d be thrilled to know that his name and likeness has become synonyms with Monster Kids around the world because of the Rondo Awards!

This has been released by BearManor Media and is available in a hardcover edition ($39.95) or a paperback edition ($29.95). You can order your copy at their website HERE.