While a lot of people will be posting little April Fools jokes throughout the day, I thought I’d rather spend the time talking about one of the greatest actors that has ever graced the silver screen, who just happened to be born on this day, 139 years ago. His name is Lon Chaney. And I say is because thanks to those wonderful people that have worked on keeping films restored and alive over the years, we can still watch and enjoy, and be amazed at the performances that Chaney gave in his films, meaning he is still with us!

END_OF_DOCUMENT_TOKEN_TO_BE_REPLACED

Just when I was content with not getting into collecting a lot of these horror action figures or collectible figures, I hear about some of these Hammer figures that Mego is now putting out. These are all 8″ figures that pre-orders are being taken now. The two they announced last week were for The Gorgon and The Mummy. Which, while they were not bad looking and only priced at $20 each, it didn’t make me change my mind on having to collect them.

END_OF_DOCUMENT_TOKEN_TO_BE_REPLACED

Horror scholar David J. Skal has a new book coming out this fall, just in time for Halloween, entitled Fright Favorites: 31 Movies to Haunt Your Halloween and Beyond. Presented by Turner Classic Movies, Skal takes on 31 films ranging from the silent era, hitting a few titles from each decade through the ’80s, and a few beyond that. Most of these everyone will agree are classics, with a few comedies listed in the later day titles. The description in Amazon says they are “family-friendly” but not sure The Exorcist (1973) and The Thing (1982) are ones I would be screening for 8-year old Timmy! END_OF_DOCUMENT_TOKEN_TO_BE_REPLACED

Wow. This one is a bitch to accept. Yes, the Maestro was 91, but for the hours and hours that I, as well as millions of other film lovers, have been entranced by his music, it still hurts. Even if we just talked about the scores he did for horror and giallo genres, from Dario Argento’s first trilogy of films, Fulci’s A Lizard in a Woman’s Skin, Mario Caiano’s Nightmare Castle, Aldo Lado’s Short Night of Glass Dolls, to even John Carpenter’s The Thing, his scores always made an impact. That is not even getting into what he did for the western. Even if people didn’t know Morricone’s name or what movies he scored, if you started to play the opening theme from The Good, the Bad, and the Ugly, they would know it.

So when we read of the news yesterday morning of his passing, I immediately had the opening music from his score for Argento’s Phantom of the Opera in my head. I’ve always thought it was a beautiful and sad piece of music so it just kind of fit today.

There really isn’t much more I could say, other than thank you, Maestro, for the countless musical memories and emotions that you’re work has given us fans. Rest in Peace, and know that your legacy will live on for as long as people are watching movies.

The Phantom of the Opera (1989)
Released by Restless Records
20 Tracks with a Total Running Time of 36 min.
Music Composed and Conducted by Misha Segal

I was one of those fans eagerly awaiting for this film to hit the theaters. I knew Robert Englund was much more than just Freddy Kruger so I was excited to see a new version of one of my favorite horror characters. I was not expecting the music to have an much of an impact on me as it did. So much so that I was drying for the score to get a release on CD! END_OF_DOCUMENT_TOKEN_TO_BE_REPLACED 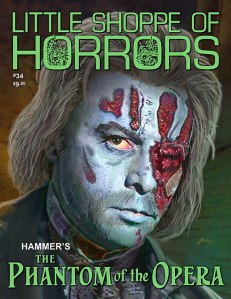 I don’t buy too many magazines these days. They are a bit pricey for the content you actual get, plus they are not the hardest to find these days. Sure, I’ve tried subscribing to a few, but some of them don’t seem to worry about when you get your issue. Since most of them are 1/3 of ads, I feel that you’re better off putting that $10 towards an actual book. But that is just me.

But, one magazine that I think is much different than those, and one that I buy each and every time a new issue comes out, is Richard Klemensen’s Little Shoppe of Horrors. I have been picking up them religiously since issue #8, which came out back in 1984. “The Klem” as he is called, has been putting this magazine out for over 40 years. If there are two things that shows in each and every issue is passion and dedication for Hammer Films, as well as British horror in general. With every issue, information is packed to the gills from the topics they are covering, with some stunning artwork filling out the pages. You’ll find information and interviews that give you a lot of insight of these films. And the “making of” pieces, which are usually written by Bruce G. Hallenbeck, are worth the cost of the issue alone. He never fails to shed new light on whatever film he is writing on.