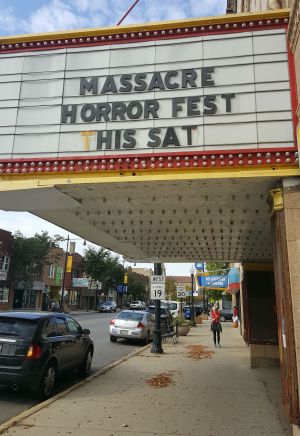 The very following Saturday, on the 22nd of October, was when the other 24-hour marathon, called simply The Massacre, was being held at the Patio Theater. This is another old Chicago theater that is just beautiful. The lobby is just incredible, like stepping back in time. It thrills me to no end  that someone is trying to keep this place open and alive. The theater itself is just huge, with plenty of seating for all the fans coming out to enjoy these movies. In the past, there had been issues with heat, either not having any or in the summer being just way too warm. Lucky for all of us, there weren’t any of those issues now, which was a great relief. Plus, I was not working this event, but was there just to sit back and enjoy the films, which was going to be a nice change of pace after the previous week. Since this time of year tends to be pretty busy for me, it’s tough for me to actually have time to sit and watch a flick every now and then. So this was going to be a great opportunity to do just that.

END_OF_DOCUMENT_TOKEN_TO_BE_REPLACED 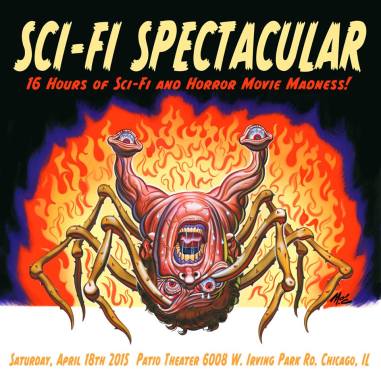 It has been a while since we’ve been to a movie marathon so I think it is about time. This Saturday, we’ll be heading into Chicago to the Patio Theater for this year’s Sci-Fi Spectacular, which features “16 Hours of Sci-Fi and Horror Madness”, though according to the lineup, it only goes to about 2:30am, which is about a feature short of 16 hours. But no worries, because they have a great lineup of titles that will be great to see on the big screen, no matter if they are DVD projection or from a film print.

They also have a couple of guests that will be there, but will also be signing FOR FREE! See that…it is possible to get some guests for an event that don’t charge. Plus, along with that signature, you can get your picture taken with them, again FOR FREE! Jack Sholder, director of The Hidden, Alone in the Dark, Nightmare on Elm Stree 2, almongst other titles, will be there, along with actress Jennifer Rubin, who appeared in Screamers, The Wasp Woman, Bad Dreams, Nightmare on Elm Street 3, as well as a few other titles out there. Plus there will be vendors, short films, and plenty of other cool stuff to keep you awake and entertained.