You can’t be a fan of exploitation cinema of the ‘60s and ‘70s and not know of Sam Sherman, either by name or the multitude of film titles that he had his fingers in. Sherman only has 28 credits as a producer, many of them for films directed by his good friend Al Adamson, but his mark on the film world is so much greater. He was an ad man who could come up with some of the best titles, promotional ideas, gimmicks, and all the other ballyhoo so memorable, sometimes more than the films themselves!

He is also the man that was responsible for introducing Paul Naschy to the states, when his company, Independent International, picked up Naschy’s Mark of the Wolfman when they were looking for a Frankenstein picture that they had already promised distributors. It featured two wolfmen and two vampires, but definitely no Frankenstein or his creature. But somehow, due to the creative genius of Sherman, Mark of the Wolfman now became Frankenstein’s Bloody Terror. If you don’t know the whole story already, then you’ll have to buy the book to find out!

END_OF_DOCUMENT_TOKEN_TO_BE_REPLACED 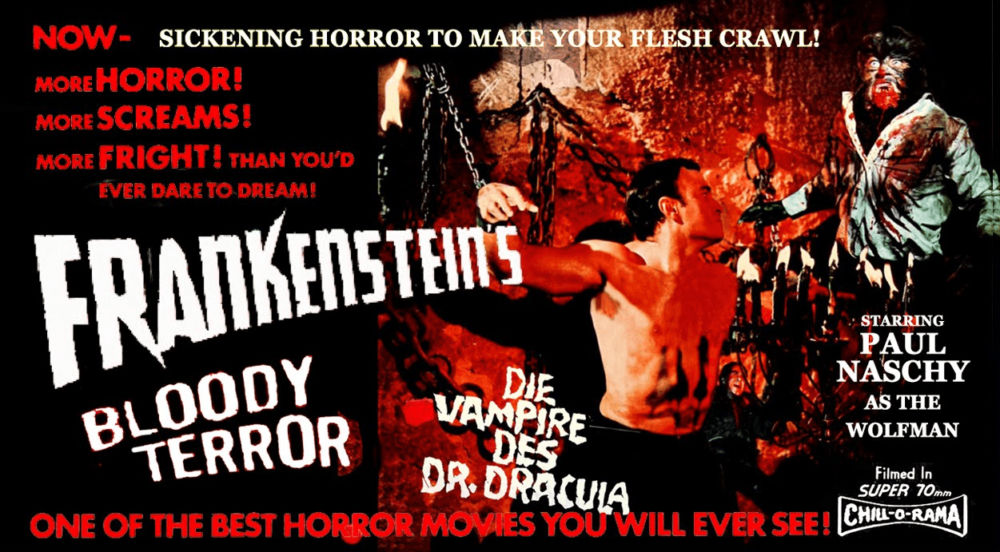 Folks in the New York city area, tomorrow you have the chance to see a rare screening of Naschy’s debut of his Waldemar Daninsky character, in the 1968 film Frankenstein’s Bloody Terror (or at least the version that was later released here in the states) in 3D, thanks to the wonderful people at Garagehouse Pictures.

At the Quad Cinema tomorrow at 3:05pm, in part of their special 3-D festival, you’ll get to see this amazing film like very few people have had the opportunity. Sam Sherman, the man really responsible for bringing Naschy’s name to the states when he bought this film for distribution here, will be there for the screening.

Sure, this is a little short notice, but if you’re in that area, I wouldn’t pass up this chance. I mean, Naschy in 3-D??? I’m still hopeful that this print will make it’s way out to the Midwest at some point. But in the meantime, you East-coasters better take advantage of it!

For more information about the screening, just click HERE.