This time of year, we always see those list of names that we’ve lost over the last year, that were responsible for some of the great entertainment that we’ve enjoyed over our own lifetime. It is no different here at the Krypt.

Seeing these lists are always such a double-edge sword. On one hand, we feel the loss of this great talent. But on the flipside, we’re reminded that we have bits and pieces of their genius forever on film, that we can revisit time and time again. They make us cry, laugh, think, shrink back in terror, or just sit back and be in awe of this talent that has been captured on screen. The beauty of this is that these people listed below may have gone on to whatever the next journey is, but because of their work in movies, we can still enjoy them, over and over again. Because we are all true movie lovers, we’ll get that warm and fuzzy feeling whether we’re watching Scott Wilson’s smooth talking killer in Richard Brooks’ In Cold Blood (1967), Celeste Yarnell trying to escape the crazy Dr. Lorca in Beast of Blood (1970), or even laughing out loud when we see the quiet and patient Donald Moffat trying to get untied from a couch in John Carpenter’s The Thing (1982).

END_OF_DOCUMENT_TOKEN_TO_BE_REPLACED 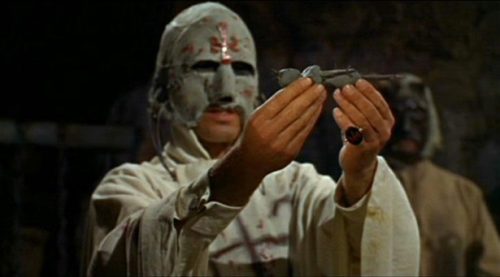 Yeah, I know this was all over Facebook yesterday, but damn if I’m not going to help spread the word a bit more! While I may be a huge Hammer fan, their 1966 film The Plague of the Zombies is one of my all time favorites of theirs. So I am more than thrilled to see this hit Blu-ray, thanks to Shout Factory!

This was Hammer’s only movie that dealt with zombies, though these are the voodoo type, not the flesh-eating type. Maybe because Romero didn’t unleash his until two years later. But this is a prime example of what Hammer did best. They had an great cast with two powerful leads, André Morell as Sir James Forbes and John Carson as Squire Hamilton. Morell is so much fun to watch, being so proper and the whole stiff upper lip, but yet still has a dark sense of humor. Carson, who plays the villain, was born to play this part. Whether it is his voice, which is very similar sounding to James Mason, or his evil stare, that can easily hide behind a smile. Of course, throw in Michael Ripper in a minor role, and it makes it even better!

END_OF_DOCUMENT_TOKEN_TO_BE_REPLACED

One of my favorites from Hammer Studios is one of their 1966 “Cornish Horrors”, Plague of the Zombies, made back to back with The Reptile. From the incredible look of the zombies, to the bad-ass villain played by John Carson, to the straight-laced hero played by André Morell, it always delivers the goods, each and every time I watch it. Another one of the reasons is the rest of the stellar cast, including Jacqueline Peace, who plays the doomed Alice. Pearce’s performance gives the viewer such a feeling of dread because we all know what is going to happen to her and we can’t stop it. And then in The Reptile, she gives another performance to draw the audience in with her pathos.

In both of these films, not only did she have to create these characters and grab hold of the audience, she also had to endure quite some time in Roy Ashton’s makeup chair. But she not only played a couple of iconic Hammer characters, she caught the attention of many fans. So we are very sadden to hear of her recent passing.