Just when I was content with not getting into collecting a lot of these horror action figures or collectible figures, I hear about some of these Hammer figures that Mego is now putting out. These are all 8″ figures that pre-orders are being taken now. The two they announced last week were for The Gorgon and The Mummy. Which, while they were not bad looking and only priced at $20 each, it didn’t make me change my mind on having to collect them.

END_OF_DOCUMENT_TOKEN_TO_BE_REPLACED

The latest issue of the long running (and best magazine devoted to all things Hammer) is now out and available to order. This issue tackles Hammer’s 1964 film The Gorgon, starring Christopher Lee, Peter Cushing, and Barbara Shelley, with the article Reflections of Fear: The Making of The Gorgon by Joshua Kennedy.

Within the pages, you’ll also find the article Cut Me a Robe from Toe to Lobe … Give Me a Skin for Dancing In: The Making of The Witches by Bruce G. Hallenbeck, as well as an article on the star of that film, Joan Fontaine. There is also an article on Don Houghton, the screenwriter of the modern day Dracula films Hammer made in the early to mid ’70s, by David Gee.

Like with any issue of Little Shoppe of Horrors, every page is a delight and filled with great stuff. Head over to their website HERE to order your copy now. And if you want to know more about Hammer, just pick up some of their back issues that are readily available.

I have quite a few famous horror figures in my collection that I’ve picked up over the years. Some are model kits, many of which I actually painted myself. Others are statues I’ve purchased that came painted already. Granted some of these were a bit pricy, but never more than a 2-3 hundred at the most. Granted, the full size bust of the poster zombie from Zombie or Dr. Hill’s decapitated head in a pan were a bit higher than that, but for a figure, I try to shy away from the real expensive stuff, mainly because I personally just can’t invest that much money into something like that.

But now Sideshow Toys has announced a couple figures that are $530 EACH and I’m trying to convince my brain that I DO need to invest in these!

END_OF_DOCUMENT_TOKEN_TO_BE_REPLACED

First news is that their latest book, The Hammer Vampire Scrapbook, is now available to order. There are only 700 copies being printed so when those are gone, it’s gone! So make sure you order your copy now if you’re interested. Yes, they are a bit pricy, especially if you’re having them mailed over here to the States. But since I have copies of all of their books in my own library, I can honestly say they are worth every penny spent. They are lavishly produced and look amazing, not to mention all the incredible content within the pages. Really a must for any serious Hammer fan. Just click HERE to order your copy now.

But wait! There’s more! While Mr. Kinsey stated that the next entry in their Scrapbook series will be on the Karnstein films, he is also working on the next volume in his Fantastic Films of the Decades series, Vol. 4 – 1940s Part 2: 1944-1949, he stated in his last email update that he is working on a 3 volume set called The House that Hammer Built, which will cover the complete Carreras years, from 1935 to 1979. According to Kinsey, this will be “my own personal definitive Hammer work, a chronological journey through Hammer’s history looking at all of their films during this period, so will be finally covering the early Exclusive films as well as Journey to the Unknown and un-filmed projects, with new research and bringing together info from my previous Hammer books.”

END_OF_DOCUMENT_TOKEN_TO_BE_REPLACED

Way back in July of 2020, we posted about FAB Press announcement that they would be publishing Tony Dalton’s authorized biography of the incredibly underrated director Terence Fisher, best known for the work he did for Hammer Films. Well now it is at the printers and should be released next month. But you still have time to pre-order it and get a signed edition! The price is £29.99 (which right now is about $42), but we all know the beautiful work that FAB puts into their books, so it will be worth every penny. Not only that, but this hardcover edition is over 500 pages, almost that many illustrations, and is the first authorized biography of the man who helped start Hammer in their reign of terror that lasted over three decades.

Starting in the business as an editor in the mid-30s, he started directing in 1948 with A Song for Tomorrow. But in 1952, he started his association with Hammer Films, directing the crime drama Man Bait. He would dabble in science fiction with titles like Four Sided Triangle and Spaceways (both 1953), but it was in 1957 when he directed Peter Cushing and Christopher Lee in The Curse of Frankenstein that made the world take notice.

I can’t wait to dig into this book and if you’re a serious fan of Hammer Films, this really is a must. To get your pre-order in, just click HERE to get to FAB Press’ website.

Orders are now being taken for the latest issue of the magazine that has been running to close to half a century! Issue # 46 will be covering Hammer’s Dracula (1958), or as known in the states here, The Horror of Dracula, with the making of article by Bruce G. Hallenbeck. There will also be a tribute to Barbara Shelley, the Making of the Men Who Made Hammer series for Shout Factory, and so much more.

If you’re not familiar with this amazing magazine, I couldn’t urge you enough to look into it. If you love Hammer and British horror in general, there is no better magazine than this one. Always filled with amazing articles, incredible artwork, and so much information. Once you start, you’ll be like me and be hooked!

For all the ordering information, just head over to their website HERE.

One of the positives for 2020 was the resurgence of the drive-in theaters. With all the social distancing, a drive-in theater is the perfect place to go see a movie, staying safe by not having to be in a large group of people. In fact, we made more trips to the drive-ins this year than we normally do, and had a blast each and every time. It was just a magical return to somewhat of our normal convention or movie viewing get-togethers, even though everyone was very good about keeping our space and wearing masks. But even with that, it was so much fun, and a little resemblance of the much-missed conventions. END_OF_DOCUMENT_TOKEN_TO_BE_REPLACED 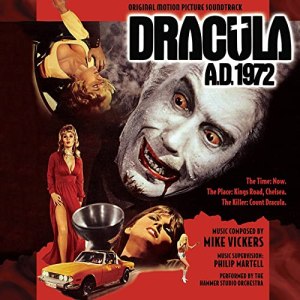 Growing up watching a lot of television in the early ’70s, you became pretty accustomed to theme shows from shows. So the first time I remember hearing the score for Dracula A.D. 1972, in my head, I heard “A Quinn Martin Production”. While most of you out there have no clue what I’m referring to, they were a production company that made more than a few shows back then.

Anyhoo… That is the big difference with this score, coming from Hammer that was known for their bold and gothic musical scores, hitting your ears as hard as the bright red blood hit your eyes. Vickers came up with a very modern, almost jazz sounding Main Theme, that while dramatically different from Hammer’s past, it actually works quite well here. The music, as well as the film, are quite dated in their look and feel. But Vickers does a pretty good job blending in the new with the old. Track # 5, Devil’s Circle Music: Excerpt from White Noise, is a wild mixture of percussions, distorted screaming, and other disturbing sounds, blended together like a bad acid trip. But when viewed in the film, it works just right. END_OF_DOCUMENT_TOKEN_TO_BE_REPLACED

And we lose yet another movie icon. Yesterday, we lost the actor to give physical life to one of cinema’s greatest villains, Darth Vader from the original Star Wars trilogy, David Prowse. Being a huge fan of that series, I had learned all of the main actors’ names, so I knew who Prowse was at the time. But it wasn’t until years later, when I started down my path of the horror genre, that I realized his connection to Hammer Films, as well as the many other things he had worked on.

But as I delved more into the works of Hammer, I discovered that Prowse played the creature in not one, but two different titles in their Frankenstein series. The first with Ralph Bates as the scientist in The Horror of Frankenstein (1970) and second with Cushing back in the role of the mad baron Frankenstein and the Monster from Hell (1974), as well as playing the strongman / vampire familiar in Vampire Circus (1972). He made dozens of other appearances in genre titles, even appearing in a couple of Doctor Who episodes. END_OF_DOCUMENT_TOKEN_TO_BE_REPLACED

While most “normal” critics would look down on a horror film, yes… even ones from Hammer Studios, this is a perfect example of how well made these pictures really were, from the acting, the production design, to the look and lighting of the entire running time. If you ever doubted that, just watch this 2K scan of The Brides of Dracula recently released by Shout Factory on Blu-Ray. END_OF_DOCUMENT_TOKEN_TO_BE_REPLACED

What kind of cookies does one eat at Monster Bash? Well Monster Cookies, of course!
And some more Naschy and some other Spanish horror items.
Day 2 at Monster Bash. Always a good show when you find more Naschy stuff for the collection!
All set up and ready for the fun at Monster Bash!!! Come see us and buy a book! It will make you smarter!
This is the last issue I need to complete my Little Shoppe of Horrors collection. I started buying them with the issue right before thus one, but had missed this one. But then started buying each issue religious afterwards. Such a wealth of information in each issue. Kudos to Dick Klemensen for keeping it going for so many years.
Our newest edition to the family. Just got rid of one clown and now we got another!!!