If you’re a fan of Peveril Publishing and have already picked up their first 3 volumes in their Fantastic Films of the Decades series, then you probably already know this, but volume 4, which deals with films from 1944 through 1949, has arrived from the printers and will be going on sale very soon on the Peveril site. The titles from Peveril go pretty quickly once they are announced so the best way to know about it when it does become available is to sign up for their newsletter on the site.

I have the first 3 volumes and definitely plan on adding this one to the library. Like all their other books, they are beautifully laid out, tons of great graphics and interesting information. For all the details, head over to their site HERE.

Of course you do! And these are ones to definitely add to your library.

The first one is from our good friend Troy Howarth, published by BearManor Media, this time covering a movie that not only is one that doesn’t get much attention, it is one well worth your attention. The film is Alfred Sole’s 1976 film Alice, Sweet Alice, and the book is entitled Unholy Communion: Alice, Sweet Alice from Script to Screen.

Within the 300+ pages, Howarth goes through the history of this little film that was made outside of the Hollywood system, as well as background information on Sole. It “explores the genesis, production, and reception of one of the key horror films of the 1970s.” We get a brand new in-depth interview with Sole, going through his entire career, as well as reproducing the original shooting script, and plenty of analysis of not only the film, but the genre at the time as well.

Howarth has written several books, such as a 3-book series on giallo films, as well as one on Dario Argento, John Carpenter, Mario Bava, Paul Naschy, and more. Like all of his titles, I can only assume it will be a must read. You can order this directly from BearManor Media or through Amazon. It is available in both hardcover ($39.95) and softcover ($29.95).

END_OF_DOCUMENT_TOKEN_TO_BE_REPLACED

First news is that their latest book, The Hammer Vampire Scrapbook, is now available to order. There are only 700 copies being printed so when those are gone, it’s gone! So make sure you order your copy now if you’re interested. Yes, they are a bit pricy, especially if you’re having them mailed over here to the States. But since I have copies of all of their books in my own library, I can honestly say they are worth every penny spent. They are lavishly produced and look amazing, not to mention all the incredible content within the pages. Really a must for any serious Hammer fan. Just click HERE to order your copy now.

But wait! There’s more! While Mr. Kinsey stated that the next entry in their Scrapbook series will be on the Karnstein films, he is also working on the next volume in his Fantastic Films of the Decades series, Vol. 4 – 1940s Part 2: 1944-1949, he stated in his last email update that he is working on a 3 volume set called The House that Hammer Built, which will cover the complete Carreras years, from 1935 to 1979. According to Kinsey, this will be “my own personal definitive Hammer work, a chronological journey through Hammer’s history looking at all of their films during this period, so will be finally covering the early Exclusive films as well as Journey to the Unknown and un-filmed projects, with new research and bringing together info from my previous Hammer books.”

END_OF_DOCUMENT_TOKEN_TO_BE_REPLACED

There is a new book that just came out called 40s Universal Monsters: A Critical Commentary, covering all of the monster films that Universal put out during that decade. Author John T. Soister had published a similar book back in 2001 covering the Universal films of the 30s, entitled Of Gods and Monsters: A Critical Guide to Universal’s Science Fiction, Horror and Mystery Films, 1929-1939. Now, along with contributors Henry Nicolella, Harry H. Long, & Dario Lavia, they take on the ’40s, covering 66 titles from The Invisible Man Returns to Abbott & Costello Meet Frankenstein.

But what does have to do with opinions? Hear me out. Looking through my own library, I have several books that deal with the early days of cinema. If we’re talking about the silent era, we have Silent Screams by Steve Haberman, or Wayne Kinsey’s entry in his incredible Fantastic Films of the Decades series, as well as Troy Howarth’s own series, Tome of Terror, who has covered the decade of the ’30s as well. Kinsey is already up to halfway through the ’40s with his ongoing series. But then I also have Universal Horrors by Tom Weaver, Michael and John Brunas, Soister’s aforementioned Of Gods and Monsters, Mank’s Hollywood Cauldron, Senn’s Golden Horrors, and even a few others titles. Then we move into the ’50s and beyond with multiple titles in each of those as well.

END_OF_DOCUMENT_TOKEN_TO_BE_REPLACED 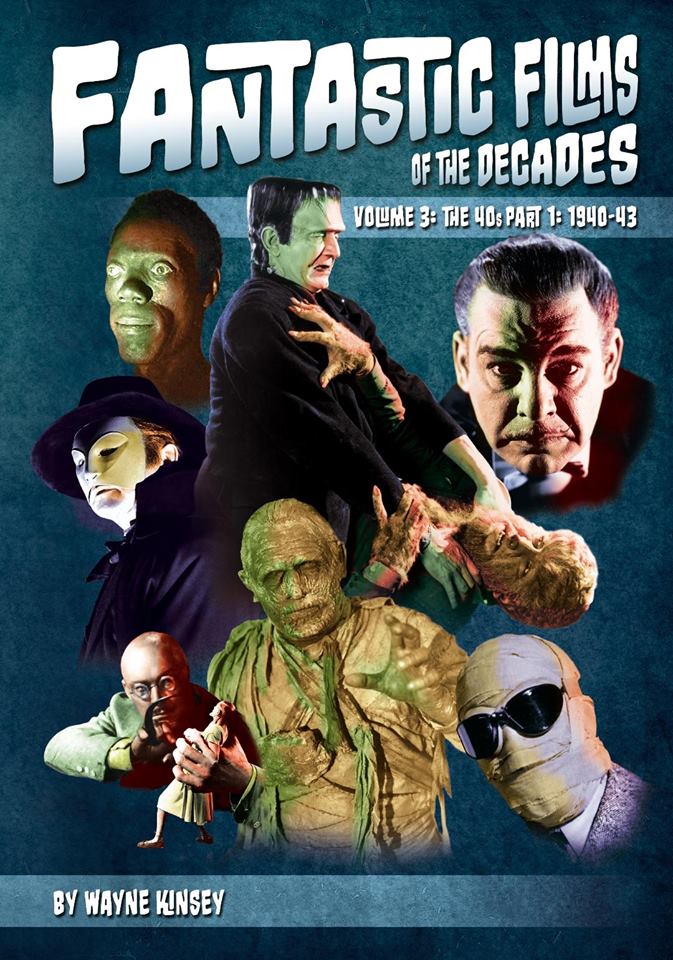 Coming out next month, Peveril Publishing will be unleashing the latest edition of their incredible series, Fantastic Films of the Decades – Volume 3: The 40s Part 1! We have many of Peveril’s books and they truly are works of art. Just beautiful to page through and look at the incredible layouts and photos. Of course, the information in them is just as good! And now, you can add the latest edition to your own library.

With another limited release of only 500 copies,  you don’t want to be left out. There are a few copies left of the first two volumes, so you still have a chance to get caught up, which I would highly recommend.

For more information on the release, head over to their website HERE. 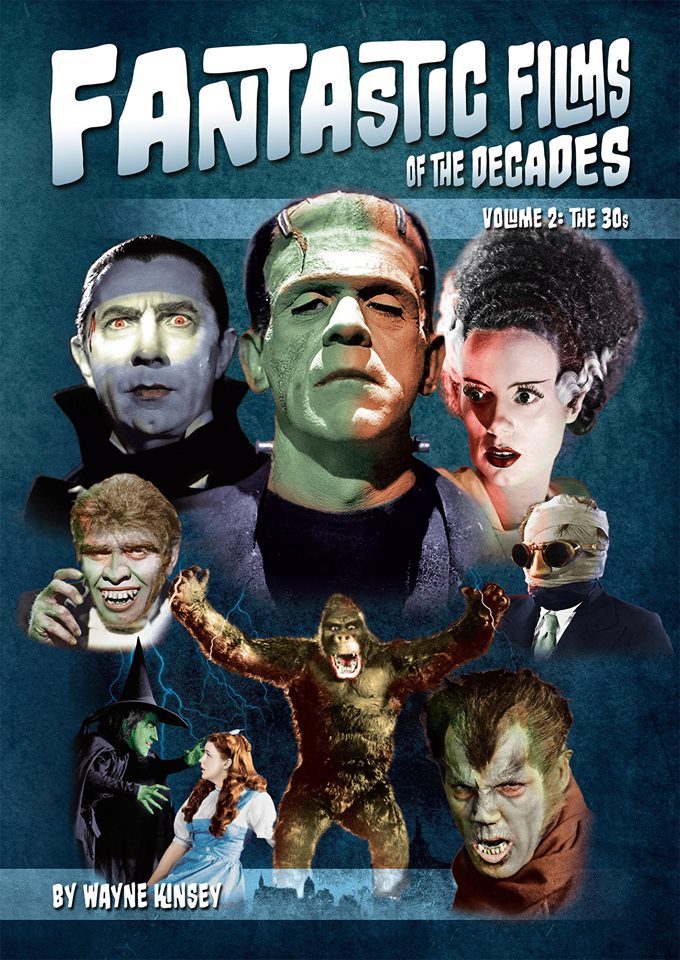 Some time ago, we posted a little announcement about a new book coming from Peveril Publishing, called The Hammer Dracula Scapbook. Now they are still working on their on-going series of Fantastic Films of the Decades series, with volumes 1 (the Silent Era) and 2 (the 1930s), and have another 7 volumes planned out. While a bit pricey to get them from across the pond, they are worth every penny. Beautifully laid out, filled with glorious photos and tons of information.

But apparently that wasn’t enough for them to have us fans drooling over the next installment. They go ahead and announce this Hammer Dracula Scrapbook, that will have a “lavish tome full of rare images, posters, lobby cards, advertising materials, set design drawings, script pages, schedules, documents, contracts and other assorted ephemera from Hammer’s Christopher Lee Dracula series.” But silly me, it didn’t dawn on me that this was going to be just the first in its own series. Following this title will be The Hammer Frankenstein Scrapbook, the Hammer Vampire Scrapbook, the Hammer Monster Scrapbook ( covering the misc. beasties like mummies, werewoves, zombies, reptiles etc). and lastly, The Hammer Sci Fi Scrapbook.

So in other words, time to start looking for that part time job…

For all the latest details about Peveril Publishing, you can check out their website HERE or their Facebook page HERE. 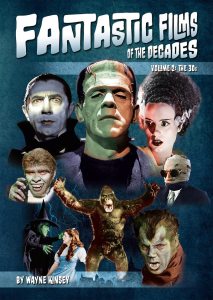 Just in case you’re waiting, volume 2 of this incredible series is at the printers. I made sure I a copy of the first volume (which is still available, so order now!) and was blown away by the quality. Then again, I have always been really impressed with the work that Peveril Publishing has put out.

Volumen 2 will cover the 1930s, with all the wonderful Universal monsters that made their mark all those years ago, along with other cinematic terrors from other studios. This volume has 256 pages, with tons of color images throughout it.

If you haven’t picked up the first volume yet, now is your chance to get both at the same time. Like the first one, this one is only going to be released in a 500 limited edition set. Once they are gone, they are gone for good. Or you’ll have to pay an arm and a leg on the secondary market. So why wait…order NOW!

For all the info, head over to Peveril Publishing HERE. 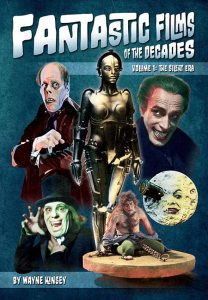 The fine folks at Peveril Publishing are about to unleash the first book in their massive 9 volume set called Fantastic Films of the Decades. Volume 1 will be about the Silent Era, written by Wayne Kinsey. If you have any of Kinsey’s Hammer books or magazines, then you know how amazing this book is going to be. And I for one, can’t wait to add this title, as well as the following volumes to my collection. Which is why I’m probably going to need a part-time job!

Peveril Publishing has only been around a relatively short time, but have put out some amazing titles, such as one of their last releases, The Hammer Legacy. Yes, it was a bit pricy, especially getting it shipped from the UK, but well worth every penny/pound! They haven’t posted what the price is going to be on this volume but hope it is reasonable for us in the states, which I’m sure it will be.

Each volume will be a hardcover edition, full color and limited to only 500 signed editions. I’m sure it will sell out rather quickly, just like their Hammer Legacy book, so don’t wait too long. They are not taking pre-orders just yet, but head over to their website and sign up for their newsletter that way you can be notified when they are taking orders. You can get to their website by clicking HERE.

The rest of the 9 volume series will consist of the following: 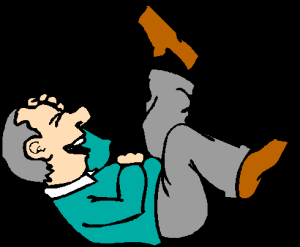