In 1960, Barbara Steele starred in Mario Bava’s Black Sunday, which set her on her path of being a horror icon. Over the next few years, she starred in many gothic horror films in Italy. When she appeared in Mario Caiano’s first entry into this sub-genre, it wasn’t her first rodeo. Before that point, Caiano’s work mainly consisted in the westerns and peplum (sword & sandal) genre. It is pretty surprising that he and co-writer Fabio De Agostini came up with such a great story, with plenty of strange angles, and filled the picture with so much atmosphere that I’m surprised that the fog doesn’t just ooze out of your television when you’re watching it. The original title is Amanti d’oltretomba, but it has been released under the titles The Faceless Monster and Night of the Doomed. But now, thanks to Severin, you can get the uncut and original version under Nightmare Castle.
END_OF_DOCUMENT_TOKEN_TO_BE_REPLACED

This is a very important title to Italian horror fans. It is, of course, the directorial debut of Dario Argento, and what would be the first film in his ‘animal trilogy’. It was this picture that would start Argento down his path as one of the most popular Italian directors, whose career has spanned more than five decades. Sure, some might frown upon some of Argento’s later films, even from the last couple of decades. But no matter how bad you might consider those films, that doesn’t change the fact that the titles in the early part of his career still are stunning classics and, more importantly, still effective today. As Troy Howarth points out in his commentary that is featured on this new disc from Arrow Video, “His reputation as one of the most influential and imaginative of genre filmmakers can never be taken away from him.” So there you go.

END_OF_DOCUMENT_TOKEN_TO_BE_REPLACED 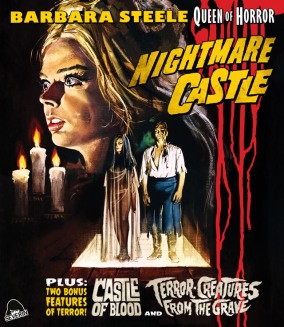 As horror fans, we all know that Barbara Steele made a few gothic horror flicks in her day. Some of the plots might even sound a bit similar….I mean, how many films can you make about ghosts coming back from the dead for revenge? Well…quite a few it seems. But the difference with these films is that they were made by talented filmmakers! So it didn’t matter if the plot had been used several times before, it was still a great movie. A prime example of that is Nightmare Castle

Sure, we all know and love Mario Bava’s Black Sunday, which was the film to catapult Steele into her path towards being a Queen of gothic horror, but I have to say that Nightmare Castle is one of my favorites of hers. The tale is about a deceitful wife and her lover who are tortured to death by her sadistic husband. But the story doesn’t end there, when they come back to haunt the husband and his new wife. With some incredible music by Ennio Morricone, and co-starring Paul Muller and the beautiful Helga Liné, I couldn’t recommend this film enough.