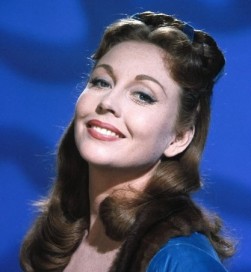 While the gorgeous Hazel Court really got horror fan’s attention when she starred opposite of Peter Cushing in Hammer’s Curse of Frankenstein (1957), she had already appeared in couple of horror titles, such as Ghost Ship (1952) and Devil Girl from Mars (1954).  But it was Curse that made her known as an early Scream Queen.

She would appear in Hammer’s The Man Who Could Cheat Death in 1959, in the underrated film Doctor Blood’s Coffin in 1961, before hitting it big with Roger Corman fans in three of his Poe films, Premature Burial (1962), The Raven (1963), and The Masque of the Red Death (1964), where she got to work with other horror icons like Boris Karloff, Vincent Price, and Peter Lorre.

Not only very appealing to the eyes, Court was a fine actress that could play the villainess just as easily as the heroine. In 2008, she released her autobiography entitled Hazel Court: Horror Queen.