With a heading like that, I knew it would get you in here! Back in November of 2018, author Heather Wixson published her book Monster Squad: Celebrating the Artists Behind Cinema’s Most Memorable Creatures, which featured interviews with 20 different makeup and special effects people in the industry. You can read our review of it HERE, but now she is back with a new book, covering more artists, creators, and technicians that have help entertain us over the years.

The new book is called Monsters, Makeup & Effects: Conversations with Cinema’s Greatest Artists – Vol. 1 is a “celebration of the creative spirit and artistic endeavors of those who have worked tirelessly for decades to create the memorable monsters, creatures and onscreen personas that have terrified us, made us laugh and filled us with a sense of wonder.” Published by Dark Ink, this 500 page book runs only $25.99 on Amazon, but they will be having a special book signing and Dark Delicacies in Burbank, CA, that you can either attend, or order your copy to be shipped to you. They have both hardcovers ($30) and softcover ($19.99) versions available. They haven’t listed any other guests besides Wixson to be there, but I have a feeling they will be adding a few more names that were covered in the book. I got my copy of Monster Squad this way, so it is well worth the extra month. Plus it supports a great independent book store at the same time!

END_OF_DOCUMENT_TOKEN_TO_BE_REPLACED 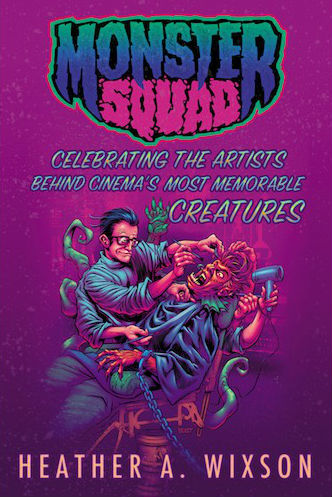 Monster Squad: Celebrating the Artists Behind Cinema’s Most memorable Creatures
Published by BearManor Media, 2017. 430 pages.
By Heather A. Wixson

In the early ’80s, makeup artists that worked on horror movies were becoming real celebrities, just as if they were the main stars of the films they worked on. Seeing names like Savini, Baker, or Bottin in the credits would get fans to go see a film on their participation alone. So many young fans out there were so inspired by these names, that they dabbled on their own with latex, spirit gum, and greasepaint, some more successful than others. Like a lot of us fans during that time, the movies affected us more than most people watching them. Some wanted to be part of the world that were creating this magic. That passion is what drove them to never stop trying, never stop learning, and just never stopping. That era when rubber monsters and outrageous creatures ruled the genre is over three decades ago, with quite a bit being replaced with CGI. But that hasn’t stopped some of these guys from continuing with their craft, still fueled by that same passion to create magic on the screen.

END_OF_DOCUMENT_TOKEN_TO_BE_REPLACED 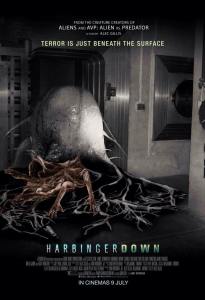 Sometimes it’s funny. Even though being a huge horror nerd, there are a lot of times I don’t really pay attention to the news sites or what is coming out or the dozens of rumors always floating around the net. Too easy to get caught up in all that crap, so I just let it pass over me. So I was really surprised to find out about a new film that comes out next week on VOD and a limited released. The film is called Harbinger Down and stars Lance Henriksen. It was written and directed by Alec Gillis and produced (amongst others) by Tom Woodruff Jr., both of which run Amalgamated Dynamics, and how have worked in the effects industry for years. They both worked for Stan Winston for years and worked on countless classic movies throughout their careers, from most of the Alien films, the Tremors flicks, and tons more.

Amalgamated Dynamics were hired to work on the effects in the 2011 film The Thing, but as we all later found out, most of their practical effects work was replaced with CGI for the final cut of the film. Needless to say, like us, they were not too happy with the end results. So they decided to make their own movie, using a Kickstarter fun, and create Harbinger Down, which according to a statement on its IMDB page, “features entirely practical creature effects created through the use of animatronics, prosthetic makeup, stop motion and miniature effects. There are zero computer animated monsters in this film.”