There is something about the mythology of monsters that is so fascinating. It seems that with ever new monster flick if we don’t have the back story to the creature, we want it! Or if there is some hints to it, we want more! What Clive Barker has done with this film, or the novella it is based on, is do exactly that, by giving us a tale of monsters that have been shunned from normal society, either choosing to or force to run and hide from it, all gathering to a place called Midian.

Before this film was even made, I was a fan of Barker’s writing. Like a lot of horror fans, his initial Books of Blood just blew me away. Then he moved into filmmaking with Hellraiser (1987), giving us something that we’d never seen or experienced on the screen before. In January of 1990, Clive Barker was at the Fangoria Weekend of Horrors convention in New York, promoting his next film project, Nightbreed. I was one of the eager fans there listening to him as he told us that in this story, the monsters were the good guys! Now, as any monster kid growing up idolizing these strange and bizarre creatures, how could a statement like that not get us excited about it. When the film was released, I was there opening night and immediately loved it. Sure, there were a few problems. Yes, some of the acting wasn’t the strongest. Yes, there were things that were different than the novella. And yes, there was that horrible ending. But I still loved it. This is a perfect example when sometimes there are elements within a film that so strong that it shrouds some of the minor things that it doesn’t seem to bother you that much.

After a credit sequence with some brilliantly conceived cave drawings that gives us a glimpse of the story to come, we then get to see some of the “breed”, in rapid cuts that just give us a glimpse of what is living behind the gates of the cemetery. Is this really a dream that Boone, our protagonist, is having, or is it a premonition? Or maybe a lost memory? The story follows Boone, who seems to have a good life going, but is deeply troubled by the strange dreams he has. It doesn’t help that his twisted psychiatrist makes him think he is responsible for some reason brutal murders. This leads him down the path to fulfill his real destiny.

As I said, I feel there are still some negative elements in the original version, but a lot of those had been corrected with the Director’s Cut that Scream Factory released on Blu-ray. I personally don’t think that Craig Sheffer is not up to the task of carrying this movie on his shoulders. Don’t get me wrong, he’s not terrible, but I don’t think he had the chops needed to show more depth to his character. Some would say that the residents of Shere Neck and the police department might be a little over the top as a bunch of right-wing, gun-toting, nutjobs, but looking at the MAGA supporters as of late, who’s to say they are not that far off. And that was 30 years ago!

Putting any and all negativity aside, I still love this movie! Maybe it is because the monsters are the “good” guys. Maybe it’s because Barker and company have created a whole world of monsters, most of which are completely original in design and concept, as well as character. How Barker created a whole mythology for this world makes it even more impressive. With fictional monsters being around since stories were told around the fire, to come up with a few new ones is one thing, but a whole city of them is just stellar. 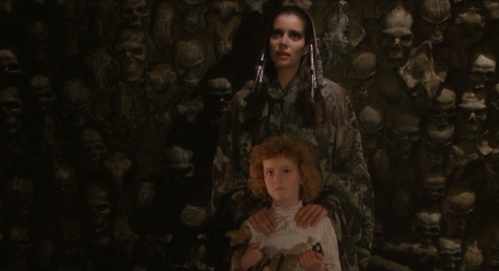 Seeing a story from the monster’s point of view isn’t something that we see too often, and it really connected with me. As the character Rachel gives Lori her little speech about being different, I think it sort of speaks to a lot of horror fans out there. She says, “To be able to fly, to be smoke, or a wolf? To know the night and live in it forever? That’s not so bad. You call us ‘monsters,’ but when you dream, you dream of flying, and changing, and living without death.” Every horror deviant out there nods their head and smiled. There is some subtext in there to be taken in different ways, but still works within the story and is not heavy-handed or preachy to the viewer. 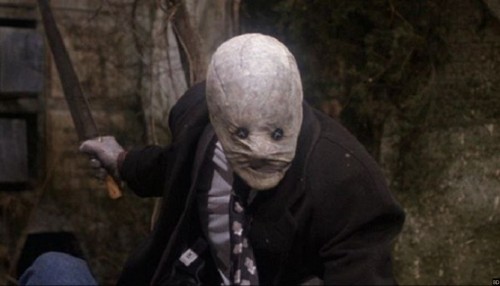 Casting David Cronenberg as Dr. Decker was sheer brilliance. Who would have ever thought a film director could make a psychotic character like this come alive? With his smooth and monotone voice, he more than fits the part. On the opposite side of the spectrum, putting Charles Haid in the role of Captain Eigerman was another perfect choice, since he is just as scary, if not more, than anything you find in Midian. Barker created so many amazing Midian residents for this story, brought to life by some amazing actors and even more talented team of makeup artists. Doug Bradley plays Lylesberg, the keeper of the laws of Midian, and adds yet another unforgettable character to his resume. Lylesberg seems ancient, tired, but full of knowledge. Hugh Ross plays one of the most memorable of the lot, playing the wild-eyed and crazy Narcisse, who gives us a lot of the humor in the film. But one of the fan favorites of the Breed is Peloquin, one that helps start the prophecy in motion. He’s full of attitude and the balls to back it up. While not one of the creatures, we get a little bit part for John Agar, an actor who did enough battling monsters in all the horror & sci-fi pictures he appeared in the ’50s and ’60s. While only onscreen a short time, he makes the most of it and still shows he can still hold the viewer’s attention.

While the movie didn’t do well at the theater, mainly due to the studio completely dropping the ball on how to promote it, at least by the time it hit VHS, they had learned their lesson. But we know that it has remained a classic among the horror genre to this day, and continues. It is a shame that we didn’t see some of these characters continue on in their own separate stories, almost like building a Nightbreed universe of films. One can hope, right? Once it hit VHS, there were all these rumors and speculations that there could be an uncut version that could be pieced together. In the original novella, the character of Narcisse is killed by Decker, which was cut out of the film because the test audiences like the character. But I remember photos in Fangoria showing his demise, so we knew it was filmed. But even after Barker had stated that the footage is lost and any hope of putting out a cut that he had envisioned is pretty much lost. Or so we all thought.

In 2009 though, things started to look up for fans when there was a screening at a HorrorHound Weekend convention of a workprint that contained a lot of never seen before footage. It wasn’t the greatest quality, some parts with no sound, unedited, and just kind of a mess. But it gave fans hope. Then in 2012, a new version, now called Nightbreed: The Cabal Cut, started making the rounds to film fests and special screenings. I was able to see one of these screenings, and while it was cool to see some new footage for the first time, there was still a lot of work in the editing and just cleaning it up. There was also a new movement, called Occupy Midian, to try and get support to show Morgan Creek, the studio that still owned the title, that it would be finically worth it to put together a director’s cut. Then in 2014, fans finally got their wish, and an approved director’s cut, all cleaned up and looking beautiful was released on Blu-ray by Shout Factory, showing the closest to Barker’s original vision that we were ever going to get. The rest is history. Once again, it does show what the support of fans can do to convince a studio to take a second look at a title. Granted, as long as they are going to make money, but it can still happen.

At the end of it all, this film still hits home and works really well. It has humor, action, some of the most unique looking monsters and creatures you’ve seen on screen, and a deep and personal story to learn from. It’s all true. Just like Peloquin says… “Everything is true. God’s an Astronaut. Oz is Over the Rainbow, and Midian is where the monsters live.”

One thought on “Movie Review: Nightbreed”