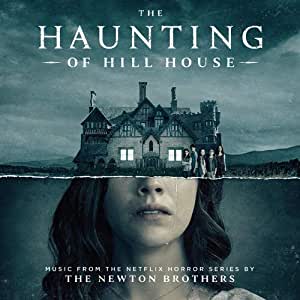 The Haunting of Hill House
Released by La-La Land Records, 2019
27 Tracks with a Total Running Time of 59:13 min.
Music by The Newton Brothers

The original novel by Shirley Jackson, and the film based on it by Robert Wise, remain my favorites in both literary form and in cinema, when it comes to haunted houses. I was overly cautious when I heard of this new series, especially when I realized it wasn’t a straight telling of the original story. I did enjoy it, but we’re not here to discuss the film itself, but it’s wonderful music. So let’s get at it.

Right from the opening couple of tracks, even the very first note you hear, the word “haunting” is defined by the music. At first with long notes from strings with an ominous but slow pounding on a piano, to a more quiet piano piece, slow and simple, giving the sense of lost and sorrow. Highly effective in setting the mood. The piano is a very strong element running throughout this entire score and I think it is one of the reasons it resonates with me so much. It gives off a multitude of feelings, from being graceful and beautiful, but at the same time  can bring up those feeling of sadness. The track “Whatever Walked There, Walked Along” is a perfect example of this.

There are a few louder and faster pieces during the running time but for the most part, those are kept to a minimum, relying more on a softer ambience. But it is the slower and somber sounds that really set this up for such an amazing score, one that I love having playing in the background while I’m working. It seems to just seep into your soul without you even knowing it.

Another great job by The Newton Brothers (Andy Grush and Taylor Newton Stewart), who have given us some other great scores for films like Oculus (2013) and the more recent Doctor Sleep (2019) and the sort of follow up to Hill House, with a new version of the Henry James story The Turn of the Screw with the series The Haunting of Bly Manor (2020). We continue to look forward to hearing what these guys will come up with next.