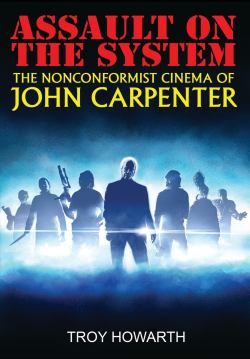 Assault on the System: The Nonconformist Cinema of John Carpenter
Published by WK Books, 2020. 460 pages.
By Troy Howarth

The latest volume from our buddy Troy Howarth is on one of my favorite directors. Next to Romero, you’d find at least two John Carpenter’s films in my top 15 films of all time. So how could I not dive into this once I got it? Yes, Mr. Howarth is a friend of mine, full disclosure here, but I think you know me by now not to pull any punches, no matter what I’m reviewing. But honestly, I never have to worry about that with his books because they are always so enjoyable to read, always feeling like a conversation with an old friend. Filled with wonderful stories, great information, and just an easy-going way of telling us this information that it just sinks in.

After a couple of chapters introducing us to Carpenter, giving us his upbringing and background (which really shows the impact on his later life, with his love of film and music), we start to go over his film career. Starting off when he is in film school in California, we do get a lot of information about each of the projects, while Howarth throws in other information about other things that are going on at the same time. It doesn’t just cover the films he directed but the scripts that he wrote, as well as the films he almost made or was even the slightest involved with. It really does show the range that Carpenter had in the different projects that “could have been”.

We also get information about the people that Carpenter worked with throughout his career, helping in making the impact that he did, such as Debra Hill or Dean Cundey. In fact, at the end of the book, there is a nice list of key contributors, which is a nice touch.

I’m pretty sure that no matter how big of a Carpenter fan you are, you will learn something here. Plus, Howarth doesn’t gloss over projects that might not be too stellar, such as Carpenter’s remake of Village of the Damned (1995) or the problematic production of Memoirs of an Invisible Man (1992). Howarth still highlights any positives that might have occurred, such as working with Sam Neill, but will point out the issues the production had.

At the end of the book there are several essays by different authors giving their unique praise on Carpenter’s work, in a variety of subjects, from his early work to his musical scores, which gives the readers a different perceptive on the director’s work. There is also an interview with the man himself, one with this wife, Sandy King-Carpenter, as well as actor/director Keith Gordon, that gives a ton of great information about the craft, working with not only Carpenter, but starting his career with Brian DePalma. Lastly, we get a completely filmography and a discography, so you can try and complete your Carpenter Music Collection!

If you’re a fan of Carpenter’s work, this really is a great read. Even with the biggest fan, I’m pretty sure you’ll uncover a thing or two that you didn’t know, and be wonderfully entertained along the way.