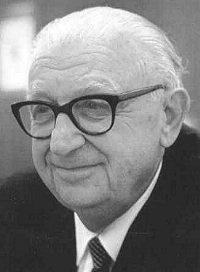 Karl Freund was a German cinematographer that worked with some other top names in the business: Robert Wiene, F.W. Murnau, and Fritz Lang. When he finally made his way over to the states, Universal quickly put him under contract, where he would photograph several of their films, including a few horror films like Dracula (1931) and Murders in the Rue Morgue (1932). He would eventually direct a few films, two of them being horror, and both of which have become classics. The first one was The Mummy (1932) starring Boris Karloff, the second one was Mad Love (1935), starring Peter Lorre. This would be his last film as a director.

Freund went back to being a cameraman, because that is what he knew best. He won an Oscar for Best Cinematography for The Good Earth (1937), nominated again for Blossoms in the Dust (1941), and was given an Oscar in 1955 in the Technical Achievement department for the design and development of a direct reading brightness meter. He eventually went to work in television, specifically on the I Love Lucy show, and helped developed the 3-camera system for filming TV shows, which is still being used today. He also developed a new way of lighting the sitcoms, making them look a lot better than what they had been.

So while he was obviously a very talented cameraman, and gave the industry some amazing technical advances, he also gave us horror fans some great movies to watch, which we still continue to do today!