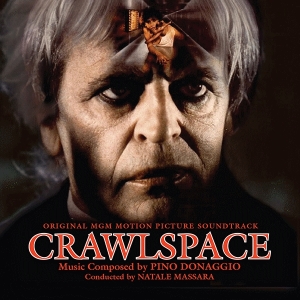 Crawlspace
Released by Intrada
16 Tracks with a total running time of 35:54 min.
Music by Pino Donaggio

This movie has been a favorite of mine ever since my first viewing, being just blown away not only by Kinski’s underplayed psychotic performance (at least on the screen), but also the pretty deep terror that is hidden underneath the layers. So when we got this soundtrack and started to play it, images from the film immediately came to mind. Donaggio created such a unique but very familiar sound with the “Main Title” theme, mainly with the use of the keyboard. But what really makes an impact with the score is the opening track, “Falling From Grace With The World”, which comes into play several times throughout the score. Pretty haunting, really.

Donaggio produces a score that not only effective in the movie, but also just has that feel of the old Empire Pictures. It is used to build up the tension and atmosphere, but then has some slower melodic pieces for the slower sequences, such as the piano piece in the “Lovers Tonight” track. Donaggio never has let me down with his work and its great to see this lesser known title get a little attention. Intrada has made a big fan of this movie very happy right now.