The Lady from the Black Lagoon
Published by Hanover Square Press, 2019. 368 pages.
By Mallory O’Meara

As a horror historian (sounds such more impressive than horror fan, doesn’t it?), anytime some light can be shed on someone important in the genre, especially when that light was purposely taken away from them, then I’m all for it.

If you were to just go by the screen credits in those classic movies, you’d never know about some of the thousands of people that actually worked on them. This isn’t anything new either, since a LOT of people go without given due credit. That’s just the business. But when that business included someone taking credit for someone else’s work, even getting rid of said person because they were starting to get their deserved credit, then that that error needs to be fixed,  especially when we’re talking about the creation of one of the famous Universal Monsters. Helping do that is author Mallory O’Meara with this new book on Milicent Patrick, the woman who actually designed the Gill Man from Creature from the Black Lagoon.

I knew of Milicent Patrick before this book came out, but only the briefest of details, such as that it was her that came up with the look of the creature, and that Bud Westmore, head of Universal’s makeup department, had pretty much screwed her over and taken the credit. Granted, Patrick wasn’t the first, or last one, that he would do that to. But as far as Patrick’s story, that was pretty much all we knew. So I was thrilled to hear that someone was putting out a book on her history. 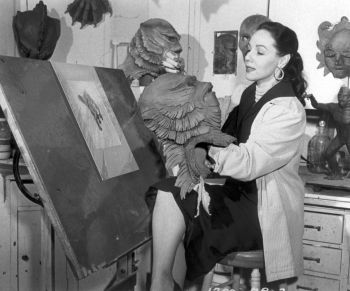 I’ve read a few complain about is that this book isn’t just a biography of Patrick, but also a lot about the author, O’Meara herself. Honestly, I found that to be one of the more engaging parts of the book. We follow O’Meara, a young woman in the movie industry herself, on her quest to find out more information about Patrick, which as we learn, was definitely no easy task. I found the connections and parallels between Patrick and O’Meara quite interesting and compelling. Sure, they both lead completely different lives, but there were a lot of similarities too and it made the journey very interesting, like we were with her, learning about Patrick as she did.

Don’t get me wrong, there is plenty of information within these pages on Patrick and you will learn a hell of a lot more than you did before picking it up. The amount of research is amazing, especially when you realize Patrick wasn’t one of those celebrities that you could just Google and come up with all this information. It took a lot of digging and research and more importantly, not giving up. So kudos to O’Meara for continuing to move forward with this project and giving Milicent Patrick back her spotlight. It really does show her passion and her drive to bring Patrick’s story back to where it should be.

And for that, as a fellow historian/fan, I applaud her.