ne more thing we can look forward to in 2019 is the continuing proof that print is definitely not dead. Sorry folks, but not even close. Granted, my bank account very well could be, but there are more than a few books coming out this year that I know will be must additions to my library. Not sure where I’m going to be putting them when they do arrive, or when I’ll get around to reading them…

FAB Press announced that they will be publishing the English language edition of Dario Argento’s autobiography, simply called Fear. That is the only details FAB released but since I hadn’t even heard that he was even writing an autobiography (that was actually published in 2014…thanks Troy!), I am more than a little excited about hearing his stories, right from him. I can only imagine the insights and stories we’re going to hear right from the man responsible for so many incredible pieces of cinema.

Add this to the fact that Troy Howarth’s new book, Murder By Design: The Unsane Cinema of Dario Argento, will be out in 2020, that means we’ll have a few more Argento books for the library shelves. Maybe we’ll even get to see Volume 3 in Howarth’s So Deadly, So Perverse giallo series. Positive thoughts, my fellow book fiends.

Fans of John Carpenter will now have the chance to learn more about his 1983 film Christine, based on the novel by Stephen King. Lee Gambin’s latest book, Hell Hath No Fury Like Her: The Making of Christine, will released on the 16th of this month, in both hardcover ($34.95) and softcover ($24.95), from BearManor Media.

Within these pages, besides the photos and production notes, we’ll read interviews with Carpenter himself, as well as screenwriter Bill Phillips, co-composer Alan Howarth, Special Effects artist Roy Arbogast, producer Richard Kobritz, actors Keith Gordon and Alexandra Paul, as well as other members of the cast and crew. According to the press release, author Gambin “examines Carpenter’s film by exploring themes such as possession, gender politics, sexuality, the use of rock ’n’ roll, the complexities of varied relationships, class resentment, the landscape of suburbia, the alienation felt during teenage years and more, including a recurring coverage of cars in film (both supernatural and not).”

Peveril Publishing is also hoping to have Vol. 3 of their Fantastic Films of the Decades series out this year too. Plus, they are planning two more Hammer related titles for this year as well. One will be The Hammer Vampire Scrapbook, which if it is anything like their previous Scrapbook titles, it will be more than worth the cost, since those volumes are simply stunning pieces of work. But the one title they announced that I’m really excited for is Hammer’s Grand Designs, which will be about Hammer’s art department. These are the guys that really made Hammer Films look the way they did. From incredible sets that were redressed time and time again but always looked amazing, with little or no money, it was these unsung heroes that part of the reason I feel that these films are still admired today. Very excited about this news. Just look at the previous volumes below to wet your appetites. Granted, if you don’t a copy of them already, it might be tough finding one. 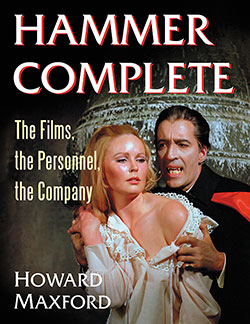 And while on the subject of Hammer, it looks like Howard Maxford’s Hammer Complete is finally out from McFarland. I’ve been waiting on this massive volume to come out for over a year, but now it is finally here! Being over 900 pages, I can’t wait to dig into this one. When even Hammer mastermind Richard Klemensen discovers something about a Hammer film even he didn’t know, I would say that’s a pretty good step in the right direction. So we’ll have to see.

McFarland has some other new titles coming out that look promising. Anatomy of the Slasher Film – A Theorectical Analysis by Sotiris Petridis looks like it would a really fun read, which I’m sure is filled with all sorts of theories and fun ideas. Then there is The Many Lives of The Evil Dead – Essays on the Cult Film Franchise, edited by Ron Riekki & Jeffrey A. Sartain. As much as these films get talked and written about, I am interested to see more of a critical look into them. And lastly, one that I am really looking forward to, is Roberto Curti’s latest, Italian Gothic Horror Films, 1980-1989. His first two books in this series are just great and filled with a ton of information, so I know this will be no different. 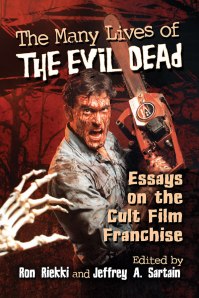