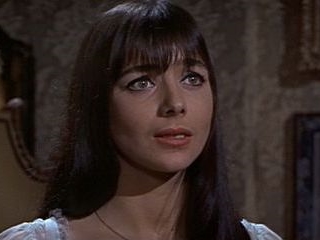 One of my favorites from Hammer Studios is one of their 1966 “Cornish Horrors”, Plague of the Zombies, made back to back with The Reptile. From the incredible look of the zombies, to the bad-ass villain played by John Carson, to the straight-laced hero played by André Morell, it always delivers the goods, each and every time I watch it. Another one of the reasons is the rest of the stellar cast, including Jacqueline Peace, who plays the doomed Alice. Pearce’s performance gives the viewer such a feeling of dread because we all know what is going to happen to her and we can’t stop it. And then in The Reptile, she gives another performance to draw the audience in with her pathos.

In both of these films, not only did she have to create these characters and grab hold of the audience, she also had to endure quite some time in Roy Ashton’s makeup chair. But she not only played a couple of iconic Hammer characters, she caught the attention of many fans. So we are very sadden to hear of her recent passing.

While her roles in the horror genre weren’t that many, she also made her mark in the sci-fi world, appearing in a few different episodes of Doctor Who, as well as playing Supreme Commander Servalan in Blake’s 7, a sci-fi program which aired from 1978 to 1981. She was originally hired for just one episode but due to her character’s popularity, she was brought back for another twenty-eight episodes.

After she trained at the Royal Academy of Dramatic Arts, with fellow students like Anthony Hopkins and John Hurt, she would land her first real movie role with Hammer.

I have to say that I am very sadden to the fact that I never reached out to Pearce, even just to say how much her performance in those two Hammer films meant to my childhood. She may have left us, but she will always be remembered for her great work in those films.

Our thoughts go out to her friends and family during this difficult time.