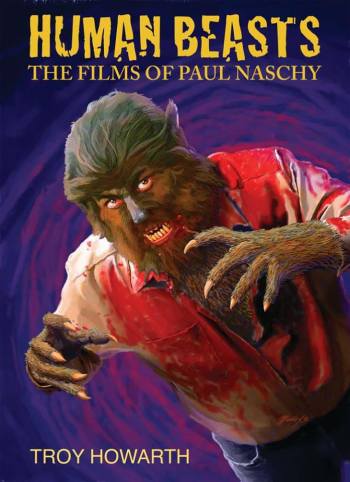 Followers of the Krypt might know of my slight fondness for the work of Spanish writer/director/actor and all around horror fan, Jacinto Molina, better known as Paul Naschy. Besides his own autobiography, Memoirs of a Wolfman or Muchas Gracias Senor Lobo that showcases all these amazing posters, lobby cars, and other material from his movies, there hasn’t been a book out, at least that I know of here in the states, that covers the massive filmography of Naschy. Until now.

Let me say right from the start that Howarth is not only a good friend of mine, but that I also have a very small part in this book, in the Naschy legacy section in the back. Also, that I’m a die-hard Naschy fan that is just thrilled to death that there is finally a book about him and his films. But I would ask you to believe that if I had issues with Troy’s writing, or this book in general, that I would be up front and honest about them here. I don’t mix words when it comes to reviewing, especially books, even more so when they are about a subject that I am very passionate about.

As Howarth notes in his intro, “This book will, I hope, make it clear that the hard work definitely was worth it  – and that so long as fans continue to carry the torch, Paul Naschy’s name will live on and continue to inspire others.” That is a perfect example of why this book is so important. It’s not about the author or that this is the first book in the states to cover Naschy’s films. It is simply about keeping the legacy of Jacinto Molina and his screen alter ego, Paul Naschy, alive and well, and with hopes to spark new interests in his work. This is something that all Naschy fans should be celebrating.

Howarth does an outstanding job bringing light to Naschy’s filmography, some of which are probably new to a lot of fans. After a brief intro, he starts at the beginning of Naschy’s career working his way through them. Some of the titles get more coverage than others, most likely if they were smaller films were Naschy just had a bit part in there. But each one is given a synopsis of the film and any interesting info on it. One of the things that I really enjoy about the coverage of the different films, like his audio commentaries on may Blu-ray releases, Howarth brings so much information about the production and who is appearing, and where have we seen them before, and little tidbits of trivia. Great stuff. 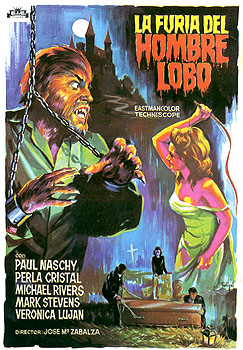 But don’t think this is a book of sheer praise. Even as big of fan as I am of Naschy and his work, I can even admit that there are a few titles that simple are not good films. And Howarth points those out as well. A perfect example is his first big film La marca del hombre lobo, where Howarth points out that is while the film does have some issues, it is more the enthusiasm than the originality of it that makes it so good. Even a film like Fury of the Wolfman, which many will admit is not the best in the Waldemar Daninsky cannon, Howarth doesn’t defend it, but does give the reader explanations as to why this might be is, as well why it still has its charm to some viewers.

The Spanish horror genre was known to film different versions of certain parts, for releases that would play in other countries besides Spain. The differences between these are also pointed out, so it gives the readers an idea of which version they should be seeking out. This is very helpful, especially to the newer Naschy cinephile!

The book is filled with plenty of photos, many coming from Naschy’s sons, Sergio and Bruno, who also both write a small introduction in the book. It’s great seeing not only their involvement with this volume, but their praise for it. There is a great, never-before-published interview with Naschy from 2007, by Shade Rupe. Very interesting stuff coming from the man, himself. Something that will be very helpful to newer fans is the listing in the back of the best releases of Naschy’s work. Back in the day, before DVDs and Blu-rays, there was a lot of scrounging around trying to get your hands on certain titles, not even caring if it was dubbed or even with subtitles. This little guide will help quite a bit. As well as the Key Collaborator section. Because you will see a lot of familiar faces through Naschy’s films, this shows you key actors that appeared with him over the years and the different titles. It also does this for directors, producers, cinematographers, and others. Very helpful again, especially for new fans that are really delving into this sub-genre.

And how could I not mention this fantastic cover art from the uber-talented Mark Maddox. Amazing piece of work!

Once again, it really comes down to keeping Naschy’s legacy alive and thriving for future fans. And I think this book will do just that.

There are two different versions of this title available, the standard edition where all the photos are in black and white, or a color edition where many of the images are in color, such as the poster art and many of the photos. It really comes down to what you’re looking for and if you want to spend a little extra for the color pics. Of course, I would recommend that edition, but the information is same in both editions.