Like any passage of time, there are bound to be good memories and bad ones. I would like to think that focusing on the good is the best thing to do, or for the bad ones, try and learn from it and take something positive from it. For example, all the great talent we lost in the last year, be thankful that we still can revisit them any time want by just popping in that DVD or Blu-ray.

After years of trying to get a screening of Mariano Baino’s Dark Waters in Chicago, it finally happened when it was part of the Music Box of Horrors. It had a good reception and writer/director Baino was there to experience the film’s very first screening in the Midwest! Thanks again to Will Morris getting it included in the lineup and Ryan at the Music Box for making it happen. And of course to Mariano and the wonderful Coralina for coming out, making this event even more special. It really was a highlight of my year. 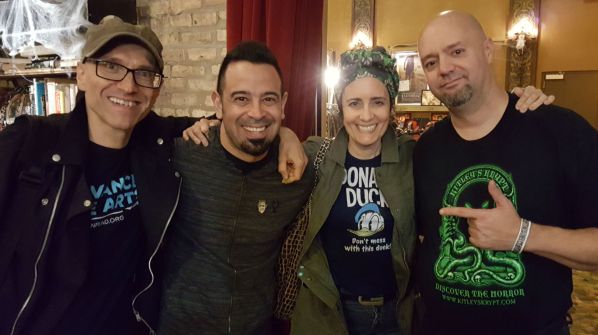 While on the subject of the Music Box, I was able to experience my first official film festival this year, Cinepocalypse, which was held at the Music Box. We only caught a small sample of the films they were screening in their weeklong festival, but I am planning to spend more time there next year. So thrilled to see one of these festivals being held so close to home!

Speaking of movie marathons, this year was our 15th year of holding our Turkey Day Marathons. Yeah….15 years. That is a lot of turkeys! In fact, not only did we get shirts made up for the event, my wife created an amazing cake for the occasion, probably the first ever Blood Freak Cake! If ever a time to be thankful, it is for having friends crazy enough to embark on these sheer maddening cinematic journeys, as well as my wife and son cranking out some incredible pizzas throughout the day. Yes, I am one lucky guy. 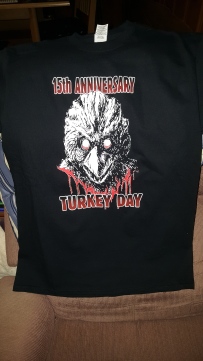 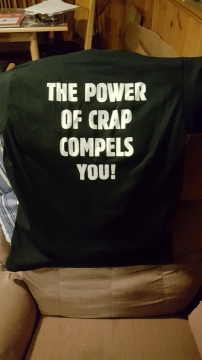 This year, I took up the assignment to do a Mummy movie retrospective for HorrorHound magazine that damn near killed me. I knew it was going to be rough going in, but damn…there are a lot of mummy movies and most of them are not good! Sad thing is that I really like the character of the Mummy, with its gothic and tragic story of forbidden love. But those later Universal sequels are a real test of merit! Not to mention most of the mummy films that followed over the next eight decades.

Sure, there are a few good ones out there, like Naschy’s Mummy’s Revenge or the cheesy Dawn of the Mummy, but then there are ones like The Mummy Lives with Tony Curtis or Bram Stoker’s The Mummy with Louis Gossett Jr. that makes you just hate life.

And then, Universal starts their ‘Dark Universe’ series back up with The Mummy, starring Tom Cruise, in hopes of doing what Marvel has done with their comic book super hero movies. One problem though…it’s coming from Hollywood, that doesn’t seem to know squat about making entertaining movies. But they do think that by spending millions and millions of dollars, that will ensure their success. And as they found out with this latest monster abortion, they were dead wrong. So wrong that it has brought their Dark Universe to a grinding halt. Honestly…I’m glad too. The truly sad part is that they probably have no clue why their movie bombed and yet a film like Guillermo Del Toro’s The Shape of Water is getting rave reviews (and for good reason too!). Now that would be the smartest idea for Universal to give any hope of bringing back their Dark Universe idea…hand the keys over to Del Toro with COMPLETE freedom! I would pretty much guarantee you he could give us some amazing cinema, if he was just given the chance and opportunity to do what he wants.

See you in 2018 and looking forward to making even more great memories.