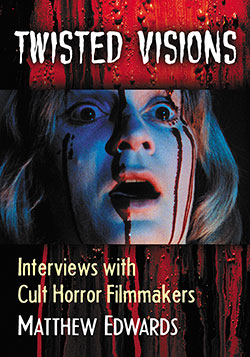 There are more than a few of these types of “interview” books, where the author has sat down with a variety of people involved in movies, getting their opinions, thoughts, and feelings towards their craft and the movies they’ve worked on. So what makes Twisted Visions different from all of those? A couple of different reasons, really. Edwards not only knows the history of the subjects being interviewed, but also really knows the films being discussed. And the group of underrated filmmakers chosen for this book are probably unknown to most of the mainstream genre fans, but are more than worthy of having their chance to talk about their career. But most importantly, the great thing about this book is that you are going to learn. That’s right…didn’t think you’d find that while reading an interview with the guy that made Nightmares in a Damaged Brain or Combat Shock, did you? But you will.

In his introduction, Edwards writes “In Hollywood, the marketing of the movie has become more important than the quality of the film.” So true, and so sad. Thankfully, the filmmakers covered in this book were not anywhere close to Hollywood and that is a good thing. Edwards has picked a great selection of talent and talks with real passion and respect for them, as well as seeing a lot more here than your average fan. In other words, the guy knows what he’s talking about!

As I mentioned earlier, you will learn a lot when reading this book. Like that director Romano Scavolini, who directed Nightmares in a Damaged Brain, spent time in ‘war-torn regions’ like Vietnam, seeing real life horrors that could never compare what he would later put onscreen. Or that while making the film Schizoid, director David Paulsen found out that Klaus Kinski wasn’t the only crazy actor he had to deal with on set. Or that director Buddy Giovinazzo, director Combat Shock, had not only written a couple of novels, but had also made a few films in Germany. And of course, including Dark Waters director Mariano Baino, within the pages was just a bonus.

Some of the titles covered here sometimes are thrown around with usually a snicker or smirk following it, like how could a film like this be taken seriously. Then you read what actually went into the making of it, with maybe little or no money, a staggering lack of time, or the countless other hurdles these low budget filmmakers came up against, and you start to look at the films a little different. Sure, some of them lack some finesse, talent, and obviously money, but the fact that we’re still talking and reading about them now, several decades later, shows that there still is something in there. Plus the fact that several of these films have already gotten a nice Blu-ray treatment shows that there are still fans out there.

The authors here pull no punches in their answers either, which is quite a nice change from some of the usual Hollywood BS we get fed. Hearing some of the behind the scenes stuff from Joseph Ellison about this film Don’t Go in the House made me want to re-watch it again. Then again, most of the films discussed here did that for me. It just goes to show you that the more you read and learn about a film, no matter how small or big the budget is, you will also look at it differently, and usually with a little more appreciation for what these filmmakers went through.

Other filmmakers covered are Jack Sholder, who has some great stories from making Alone in the Dark and The Hidden, and working on the fringes of Hollywood. Other names like the infamous Jörg Buttgereit (Nekromantic), to some of the newer independents making quite an impact, like Chad Crawford Kinkle (Jug Face) and Scott Schirmer (Found), you have a really well-rounded group of talented individuals that are still showing us that you definitely don’t need to wait for Hollywood to give you another $200 million film that has about as much passion as a step-ladder.

I can guarantee that by the time you finish reading this book, your Need-to-See movie list will grow substantially. And even on that rare chance that you’ve seen all of these films, not only will you still learn quite a bit, you’ll probably end up wanting to re-visit them again.

You can order your copy from McFarland through their website (www.mcfarlandpub.com) or their order line (800-253-2187).

A holiday tradition here at the Krypt.
Happy Birthday Pete Walker!
Happy Birthday Michele Soavi!
While at Monster Bash, I was able to add another figure in my Hammer Frankenstein series from Barry the Clayguy! Barry always does awesome work and can't wait for the next one.
Happy Birthday Fabio Frizzi!!
Happy Birthday Dick Smith!