Back in the early 80’s, I went to a midnight screening of some horror movie called When the Screaming Stopped. I had never even heard of it before, but they were passing out barf bags, so how could this not be an awesome movie! Years later, I would discover that this was the re-titling of a Spanish horror movie from Amando de Ossorio, the very man who gave us the Blind Dead series. But the feature at hand was actually Las garras de Lorelei, or The Loreley’s Grasp. Looking back, this was might have been my first introduction to Spanish horror, and probably the first time my eyes laid upon the beauty was is Helga Liné. But more on that later. Since they were passing out barf bags, the movie had to be gory, right? And at that time in my life, gore was what I was looking for. The film did deliver, on many levels. It would be years later before I truly appreciated it for what it is. And that, is one hell of a fun time. 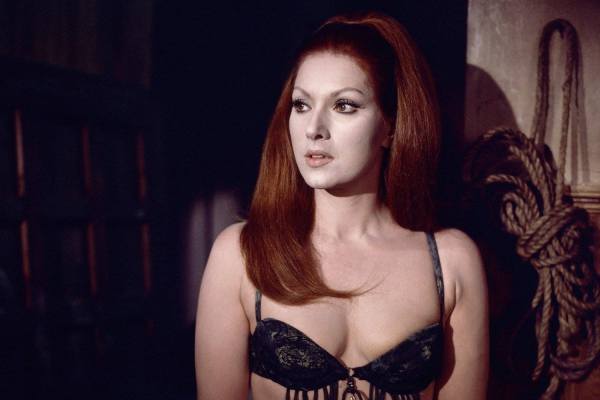 The story is about the ancient legend of Loreley, one of the sirens that would draw sailors to their doom. She is alive again, but this time is seeking out the hearts of the locals to feed on, usually found at a local school for young women. Because of the recent deaths, the school hires a hunter to protect them from these beastly attacks. But the hunter starts to fall in love with the human (and very beautiful) guise of Loreley, played by the scrumptious Helga Liné. Fans of Spanish films might recognize her name, but definitely will remember her face. She appeared with Paul Naschy in a few of his films, including Horror Rises from the Tomb (1973) and The Mummy’s Revenge (1975), and was also in other genre films like Horror Express (1972) and Vampires Night Orgy (1973), as well as quite a few other chillers, including the softcore Satanic horror flick from director Jose Larrez, Black Candles (1982). Here as Loreley, she is just stunning (of course, she ALWAYS is), and might be one of the main reasons for me liking this film so much. While the luscious Ingrid Pitt was the one from Hammer to put me under a trance, once we got to Spain, it was the lovely Liné that had my attention. But like Pitt, there is more to Liné then just her looks. She always plays a great villainess.

Amando de Ossorio is best known for this Blind Dead films, but I think with this film, he traded in the slow motion spooky atmosphere for a rubber monster and some gore. We have a lot of monster-cam shots, as it waits outside the window or in the bushes, waiting the right time to attack. When it does, the gore and brutality is there. Sure, some of the gore is a little less than real looking, even rubbery at times. But for me, it all comes down to fun. We don’t even get a really good look at the monster’s face, but can tell that it’s pretty much a rubber mask, filled with a lot of white teeth and bulging eyes. But is that a bad thing? Now you may ask how can this be entertaining if the monster’s face is a rubber mask, or that the gore looks fake. Maybe it is because of seeing it for the first time at a midnight now and I didn’t know what to expect, so it was a lot of fun back then. And now watching it, I still get that same feeling of wonderment and just what the hell the filmmakers were trying to do. Yes, the dialog is a bit cheesy, the clothes that the hunter wears are severely dated, I still think is a damn good film and is one of my favorites in the Spanish horror genre.

Besides Liné, there are several people here that appeared in quite a few other horror titles. Silvia Tortosa, appeared alongside Liné in Horror Express (1972). Tony Kendall, who plays the hunter is the snazzy patterned slacks, appeared in Mario Bava’s The Whip and the Body (1963). Loreta Tova appeared in a ton of genre pictures. Her film debut was in The House that Screamed (1970), going on to appear in such titles as  Curse of the Vampire (1972), It Happened at Nightmare Inn (1973), alongside Paul Naschy in Count Dracula’s Great Love (1973), Legend of Blood Castle (1974), and The Night of the Sorcerers (1974). And of course, there is Luis Barboo, who seemed to specialize in thugs and henchmen. He appeared in a ton of westerns but also made his fare share of horror films, including several with Jess Franco, like Dracula, Prisoner of Frankenstein (1972), The Demons (1973), The Erotic Rites of Frankenstein (1973), and Female Vampire (1975). Kendall, Tova, and Barboo all appeared in de Ossorio’s second Blind Dead picture, Return of the Evil Dead (1973). That is one of the great things about the Spanish horror genre. Once you start watching a few of these, you will notice the same faces appearing here and there. They had a good supply of both talented actors and actresses, which were always just stunning to look at, as well as usually in various forms of nakedness!

This film might not be the one to bring some serious creepiness to you, but if you’re looking for a good old fashion monster flick, with nudity and gore, then I think you could do a lot worse than this one here. Give it a try. And who knows…maybe you’ll just get hooked on Spanish horror even more!