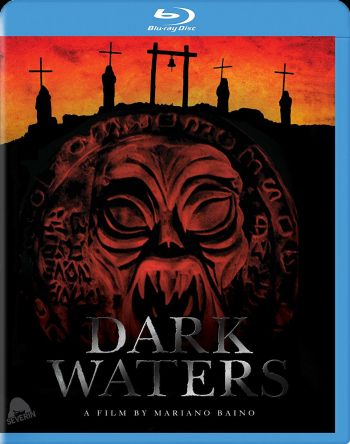 On the audio commentary for Dark Waters, director Baino mentions something that Alfred Hitchcock had said about how the invention of sound would destroy cinema. I am paraphrasing this, but his point was that after movies had sound, more time will be spent listening to the story than watching what is happening on screen. One could listen to a film and pretty much get the idea of what is going on, instead of letting the visuals tell the story, which I think is especially true with today’s features. Well, Dark Waters is a perfect example of the opposite of that theory. In fact, when it starts, there is almost 18 minutes before any real dialogue is heard. And in that short time, unforgettable images appear on screen, such as shots of nuns with large crosses on a hill, or more nuns in a darkened field at night with burning crosses, we see the murder of a young girl, with her blood flowing into the water that is leaking through the catacombs in the convent, to even something simple like an old woman on a bus playing with a couple of spiders. Thse are just but a few visual to start off the film. But it continues through the rest of the running time. If modern day Hollywood made their films look half as good and striking as this one, the cinematic world would be a much better place.

The story starts with a beautiful sequence at church during some heavy rain, with some catastrophic  effect, especially for a nun who is given a stone amulet from a little girl. Then it picks up 20 years later with a young woman traveling back to the convent to where she was born, located on this remote island, in search of answers of her past. The farther she digs, as well as what might be going on there at the convent, dark secrets start to emerge. Some might say that since this is an Italian directed film, that Baino follows the adage of ‘style of substance’. The only problem is that while the film is filled with amazing and beautiful imagery, I don’t think he sacrificed the ‘substance’. The story is pretty easy to follow, as long as you’re paying attention. Granted, it is very easy to get lost in this film, just becoming entranced with the visuals laid out on screen. This title is very different than the usual nunsploitation-type movies that we were getting from Italy (not that those are a bad thing, mind you), but it has a very Lovecraftian influence in the storyline and some of the visuals.

Kudos to the two main actresses, Louise Salter and Venera Simmons for having the film pretty much rest on their shoulders. Once Louise’s character arrives on the island, we are right behind her as she seeks out the truth to her past. And Simmons, this being her only film credit, does a splendid job as the young nun with a past of her own. And while these two do a great job moving the story alone, the stellar cast of extras that fill out the movie really add to the look and feel and ambiance of it as well. The withered old blind woman who plays Mother Superior is just terrifying while just sitting there staring off into space. Again, such an amazing visual, usually shot in either close ups or a low angle, giving such an eerie quality to it. Or even the strange man on the boat eating a raw fish, which feels and looks like he jumped out from Lovecraft’s Dagon or Innsmouth. 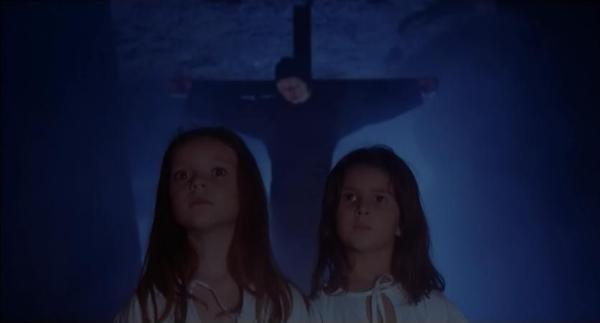 NoShame put out an wonderful DVD release back in 2005, that not only came with a bunch of great extras, but also came with a little mini-replica of the stone amulet used in the movie. How they managed that I have no idea, but I immediately picked up one when it came out. The audio commentary by Baino and Michele De Angelis is carried over from the previous release and is well worth a listen. Baino gives us a very insightful and informational discussion about the making of the film, but also little bits of trivia as well. Thankfully, all the extras from that release are on the Severin release, plus a few more tasty bits. 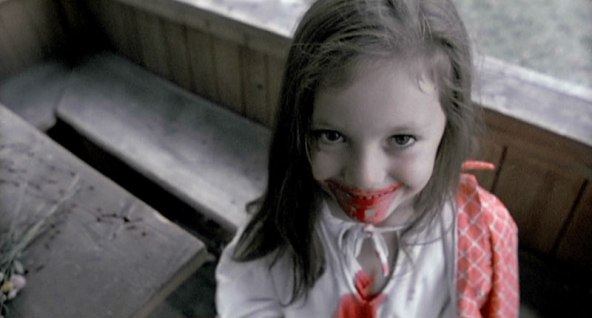 Now if just watching this movie doesn’t impress the hell out of you, then watch the documentary Deep Into the Dark Waters, one of the carry over supplements from NoShame. The fact that this movie ever got finished, let alone looking as incredible as it does, is just astonishing. With all the issues Baino and his crew went through, the fact that this astonishing cinematic nightmare came to exist in the real world really shows the talent and drive of this young director. That he (along with this crew) were able to struggle through the issues and adversity and still make sure that his vision wasn’t lost, creating the film that he had envisioned. And it still holds up today, almost 25 years later. Any filmmakers starting out need to watch this just to see how difficult this shoot really was but that it still was finished. Might make some of your production issues seem a little less epic!

There are three new featurettes on this release, that only run around 5 to 10 minutes long, but still give the viewer some more insight on this movie and how it became to be, as well as some of the influence the director had, such as from H.P. Lovecraft.

I couldn’t recommend this movie enough, especially if you are a fan of very visual films. It is a damn shame that a studio didn’t hand Baino blank check to make another feature. Then again, why not do it now then?