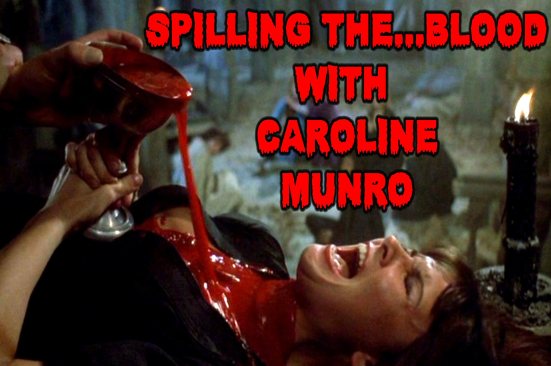 Most people know Caroline Munro as either a Bond Girl or the work she did with Hammer Studios. But Caroline has worked all over the world, with many great and talented people. So while we briefly asked her about Hammer, we tried to venture more into the other countries where she worked. This interview was conducted at that Cinema Wasteland show, in April of 2007. We especially want to thank Caroline for taking the time to talk to us.

Kitley’s Krypt:Since you’ve worked in many different countries, we’re going to jump around a bit. But let’s start with Hammer Studios. I know that you’re probably asked a lot about Hammer Films, so we won’t go into much of that. But can you tell us why you think that those films are still so popular today?

KK: I’ve always felt that the fact that they had such great talent behind the cameras, as much as in front of the camera, really made the films looked bigger than they were.

CM: Absolutely. Because the budgets were not huge. We shot them in about 4 to 5 weeks maximum. Your hours were long. You worked hard. But you had a fantastic crew with you. They were shot in really nice English locations and in good studios as well. Studios like Elstree and Bray.

KK:  Okay, going over to Italy, you worked with Luigi Cozzi on Star Crash.  That was filmed in Italy?

CM: All filmed in Italy…all over Italy. We shot all over on location, but also quite a bit of studio work.

KK: How was Cozzi as a director?

CM: He was great as a director. He’s a long time fan of the genre and a big time fan of Ray Harryhausen. Luigi told me that he’d chosen me because I had worked with Ray and also because I kind of knew how to work with stuff that wasn’t there.

KK: What about the cast? Christopher Plummer?

CM: Yes, Christopher Plummer…WOW! That was something. He actually came on the set for a day. I think we shot all of this stuff more or less in a day. But he was amazing to watch work.

KK: Joe Spinell? This was your first film with him?

CM: My lovely Joe. Yes, it was our first meeting. He was just a joy to work. And I had the privilege to work with him a couple of times after that.

KK: Now staying in Italy, quite a few years later, you worked with Cozzi again in Edgar Allan Poe’s The Black Cat?

CM: Yes, that’s right, The Black Cat. It’s interesting, since I don’t think I’ve seen the end result in that.

KK: Could you see any change in the Italian film industry from the time you had done Star Crash?

CM: Yes it had. It’s funny, because you felt more tension. I don’t know if that’s the right word, but there was more tension. But maybe again, that might have come from the producers. Where Luigi is very laid back and an artist and comes from that point of view, the money-people don’t. They’re more interested getting stuff in the can than artistic integrity. Which is a bit of a shame.

KK: What about Jess Franco?

KK: I just saw an interview with you, where you mentioned that you had never seen any of his films before working with him.

CM: I hadn’t. I feel terrible admitting that, but I hadn’t.

KK: Had you seen any of them after that?

CM: I went to a Spanish film fest and I did see some of Jess’ work. I think the work he did on Faceless was extremely good. I might be speaking out of turn, but I think he was quite proud of that film.

KK: It had a much better production value than some of the other films that he’s known for.

CM: Once again, I think that might have come from the producer, René Chateau. Maybe that was his input into it. I’m not sure.

KK: Even though there’s a lot of people in the cast, you really only worked mostly with Chris Mitchum.

CM: Yes, I think most of my scenes were with Chris. I did have a few with Bridget [Lahaie] and Helmut [Berger], so I did get a chance to work with them. What a good cast! Great cast. But mainly with Chris, which was quite intense. But he was wonderful to work with.  Lovely.

KK: That was all filmed in Paris?

CM:Yes, all shot in Paris. They treated us extremely well. Very nice. I enjoyed that experience. It was a good little one to work on.

KK: How about working with Paul Naschy in Howl of the Devil?

CM: Dear Paul. He’s a huge favorite of mine to work with. I thought he was just lovely.

CM: Not a lot. Because he wanted to film it all in English, and of course he didn’t speak it. So it was very limiting, what he could do. He tried to do it phonetically to start off with, but he was directing and acting in it as well. It proved too difficult, so in the end, he said “No, no. I’ve got to do Spanish, and you speak English.” So we struggled by doing English and Spanish, but it made it much more comfortable for him.

KK: I know, since he’s the huge fan of Hammer that he is, he must have just loved having you in one of his films.

CM: He liked Hammer films. But you can see by his work, can’t you? A lot of his work was homage to Hammer.

KK: What about working with Howard Vernon?

CM: We stayed in this monastery, but it was a hotel, and we had dinner every night with Howard.  [We] sat there, and chatted away, and had lovely dinners. I loved him.  I was so sad when he passed away. He was so very special. He really looked after me.

KK: He played in a lot of low budgeted horror films.

CM: Yea, I know, but he was such a great actor. Very underestimated. Really. He did a lot of work and I think he was happy with what he did. But he could have done so much more.

KK: Coming back to the States, how about some of the other films that you made with Joe Spinell, such as Maniac? How was the director Bill Lustig?

CM: Bill was fabulous to work with. He knew films so well, because he came from the editing side. So he knew it inside and out. I got Maniac kind of by accident, because the lead actress hadn’t turned up. I was doing a Fangoria show in New York, and Joe asked me what I was doing. I said I was going home tomorrow. So he gave me a script and said, “Why don’t you read this and see what you think?” So I read it and I thought it was interesting.  Joe was in it, and I liked Bill, so I thought why not? So we started the next day shooting the scenes.

KK: Were you aware of the special gore effects that were going to be in there?

KK: I think that mainly has to do with the performance of Joe Spinell.

CM: Oh yes, his performance was superb. Really is.

KK: How was he as a person? His characters in Maniac and Last Horror Film, are not nice guys, very sleazy, very creepy. But everything I’ve read about him is that he’s completely different.

CM: He’s a big old pussycat. A big old softie. Very complex. He lived hard and he played hard, but he had such a huge heart. I loved him, I absolutely adored him. And I miss him. We had such a good time working together. I learned so much just watching him work.

KK: After Maniac, did he contact you for The Last Horror Film?

CM: We contacted him. And he said yes.

KK: And that was shot in France?

CM: Yes, at the Cannes Film Festival. Which is a mad thing to do. I think we did quite a good job. Again, he was fantastic in that. Much of it was guerilla filmmaking, where you just have to rush in there and just shoot.

KK: Now, since you’ve worked in the States, in England, Spain, Italy, what are some of the differences in filmmaking in these different countries?

CM: America is mainly “Time is Money.” England kind of fits in the middle of the “time is money” and the artistic kind of integrity. And, of course, Spain and Italy are very laid back. What they care about is what goes on the film, maybe more than the budget. Having said that, since it is a low budget, you maybe don’t have as much luxury of time. But I find filmmaking pretty much the same the world over. I just love making films. It is my passion.

KK: Thank you for taking the time to talk with us.