Every October, the Music Box Theatre in Chicago unleashes it’s 24-hour horror movie marathon, something they have been doing for over 10 years. And this October 24th, they are getting ready to do it once again. But this time out, I think it might be a little different. This year, they have their new addition of the lounge in the theater, which is going to be perfect for vendors to be set up, so it won’t be as crowded between movies while people are coming and going. Plus, it will give more options for people to sit and relax while not in the theater. 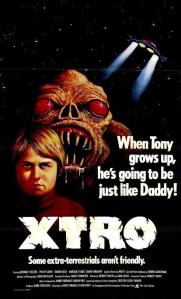 They are still announcing the films, but have so far announced the following: Child’s Play 2, Deep Red (the Hatchet Murders cut), Serpent and the Rainbow, the unrated version of Frank Henenlotter’s Frankenhooker, Jack Hill’s Spider Baby, which are all presented in 35mm prints, as well as Lon Chaney’s The Unknown, with a live organ accompaniment. Not only is this one of my favorites of Chaney’s work, but anytime you have the chance to see one of his pictures on the big screen, it really is a must. Seeing his talent on screen is just incredible.

Yes, they did drop Let Sleeping Corpses Lie from the lineup, which I have to say I was very bummed to hear. But they have added another title that is going to be a real treat. In 1982, director Harry Bromley Davenport gave us Xtro, a movie that showed us that all aliens weren’t as friendly as E.T. If you haven’t experienced this strange, gory, and trippy tale of an alien visitor, then you are in for a treat. You will see things in this movie that you probably have never seen before, like a woman giving birth to a full grown man. Let’s just say it gets a bit messy. This is also being presented from the only 35mm print known to exists. So this title alone makes it worth you coming out for this event. 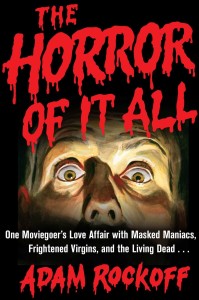 But if you needed another reason, then how’s this? Not only will we be vending in the new lounge area, with our usual array of horror reference books, horror pillows, and plenty of other terrior-ific treats, but we will have our own special guest that will be appearing at our table! Adam Rockoff, author of Going to Pieces: The Rise and Fall of the Slasher Film (not to mention screenwriter for the remake of I Spit on Your Grave), will be on hand signing copies of his latest book, The Horror of It All (Read our review of it HERE) We will only have a limited supply of copies, so make sure you come to our table quickly before they sell out. And of course, the signatures will be free of charge! Hell…we’ll even be selling the books cheaper than the cover price. Once we have a time when he will be there, we’ll announce it here on the site. So make sure you make plans to come out to this event and partake in the horrors that unfold onscreen, as well as being part of the incredible Chicago area Horror community!

They haven’t announced any other guests so far, but hope they will be soon. Especially since it is only a few more weeks away. For all the latest details about this event, just click HERE.