At the end of August, at the Skyline Drive-In Theater in Shelbyville, IN (just south of Indianapolis), they are holding their annual festival of classic monster movies being screened over 3 days. We were there for one of them a few years ago and have been trying to get back again for the fun, but just don’t seem to make it. But once again, we’re going to try to make it this year.

Starting on Friday, Aug. 28th, they will be screening Mighty Joe Young (1949), Hammer’s Curse of the Werewolf (1961), Island of Lost Souls (1932), Tarantula (1955), and Horror Express (1972). Then on Saturday the 29th, they will be showing the original King Kong (1933), American Werewolf in London (1981), Hammer’s Abominable Snowman (1957), Toho’s War of the Gargantuas (1966), and then Teenage Monster (1958). On Sunday, they will have repeat screenings of Curse of the Werewolf, Island of Lost Souls, and Abominable Snowman. I can’t tell you how excited I am thinking of having the chance to see some of these amazing films on a huge screen, not to mention at a drive-in! How cool is that? I mean seriously….the original King Kong!?!?!

Plus they will be having some live entertainment before the shows! On Friday, legendary horror host Sammy Terry will be there for some Terror Trivia. Then on Saturday, they will have the Rocket Doll Revue, plus live music by Werewolf with a Shotgun, Thee Tsunamis, and Bizarre Noir.

I know what you’re thinking…why go all the way out to a drive-in when I can just watch these movies in the comfort of my home? If you’re are asking yourself that, then you just haven’t grasp what the true drive-in experience is all about. It is just that…an experience. There is something special about sitting in your car, or even in front of your car in lawn chairs, eating popcorn and corndogs, surrounded by fellow movie fans, and enjoying some great movies on a big screen. You’re part of a special group of people that this means something a little more than just watching movies. I guess it is one of those things that it is hard to explain. If you get it, then you know exactly what I’m talking about. If you don’t, then I’m not sure how to convince you other than coming out to a drive-in one night see for yourself. It is almost like steppng back in time. 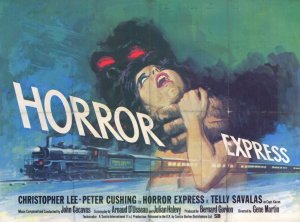 Tickets are only $10 per day and they even have free camping! Can’t think of a better way to spend the weekend, can you? For more information about this event, just click HERE.

So…who’s up for making a road trip out to a drive-in for weekend?