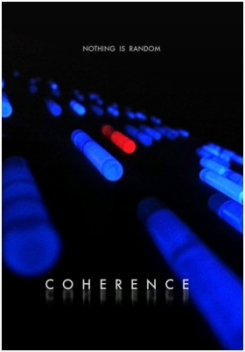 It doesn’t happen too often these days, when a movie that you know nothing about completely blows you away. A movie that captures your attention, your admiration, and carries you through to the end credits while you anxiously await what happens next. Coherence is one of those films.

Without giving anything away, the movie is simply about a group of friends getting together for a dinner party during an evening when a comet is passing by the Earth rather closely. When the power goes out, they go outside to take a look around the neighborhood and notice one house down the street that still has power. But once a couple of them walk down there to investigate, things get a little strange.

The beauty of this film is the characters. Not shot the traditional way, and almost too shaky-cam for my taste, but once the story starts, I completely forgot about all of that and was drawn into the characters and the plot. These people don’t seem like actors but real people having a little get-together.

I don’t want to give anything away about this movie other than it is one of the best movies that I’ve seen in a long time. And what will impress you even more is watching the little making-of featurette on the DVD, where the director explains how he actually made the movie. Mind blown again. This movie puts it from rating of 10 to about 15. The fact the director was able to do what he did, and the actors were still able to give the performance they did, and that the film still plays as well as it did, is simply astonishing. Watch the movie, watch the making-of, then you know what I’m talking about.